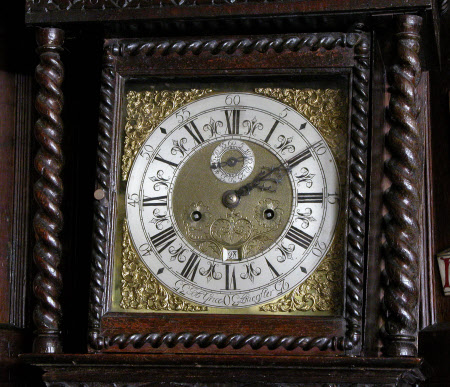 This carved oak long-case clock has a lovely mellow resonance and is thought to have been made up by A.W.Pugin from the wood of a 17th century cupboard. Pugin was commissioned by Robert Myddelton from 1846-1849 to redecorate the castle in Victorian Gothic style. The clock is displayed in The Cromwell Hall the most complete of Pugin’s interiors to survive.

Eight-day longcase clock in carved oak case, signed by Job Grice, Lancaster, c 1730/1830. Two train, four pillar movement with anchor escapement and inside count wheel hour striking on bell. Square brass dial with foliate spandrels and wide silvered brass chapter ring, having roman numerals and arabic five minute figures. Signed: “Job Grice Lancaster” at VI. Heavily engraved calendar aperture and winding holes, and seconds dial within the matted dial centre. Pierced steel hands. The carved oak case has a flat top hood with carved oak cresting and twisted columns to the sides. The case is dated in the carving: “1689” and bears the initials 'HRM'. Note: The movement dates from c.1730, but is signed by an early 19th century maker. Job Grice is recorded as working in Lancaster between 1797 and 1830. The case is said to have probably been made up by Pugin, using door panel from a 17th century cupboard. In 1989 the striking pin wheel, calendar wheel and crutch were replaced by Eric Gent