Bird-and-flower wallpaper on a green ground 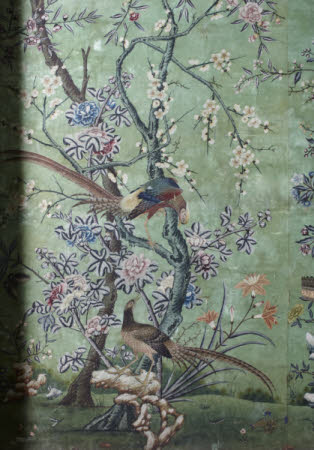 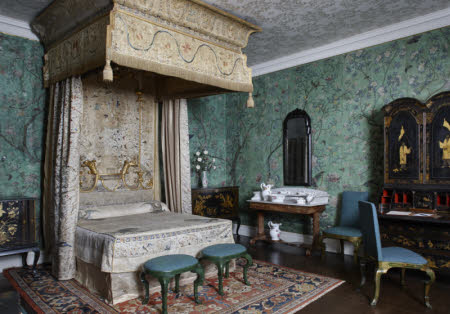 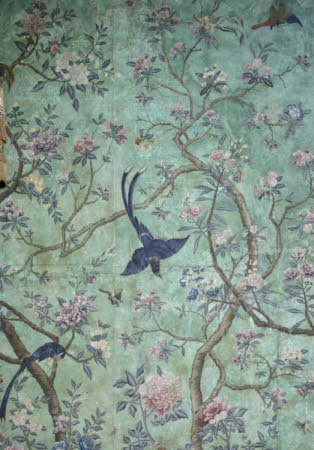 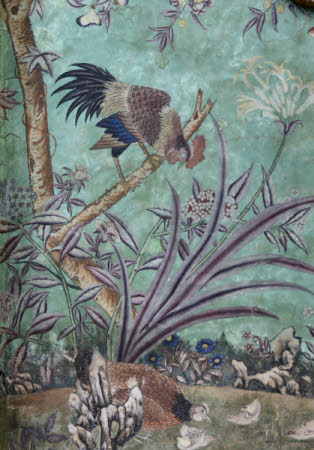 Gouache and watercolour on paper

This wallpaper appears to have been installed at Erddig in the 1770s, during the modernisation of the house by Philip Yorke I (1743-1804) and his wife Elizabeth (1750-79). It was pasted directly onto the plaster and trimmed at the top. Additional birds and flowers, either supplied separately with the wallpaper or cut from surplus sections, were applied on top of the wallpaper to fill gaps or cover joins. The background of the wallpaper was extensively over-painted, probably in the Edwardian period, when it appears that visitors staying at Erddig were asked to help with this (see Louisa Matilda Yorke, Facts and Fancies: a Description of Erthig, Denbighshire, n.p.d., pp. 49-50). Mining under the house in the mid-twentieth-century caused structural problems which in turn resulted in water damage to the wallpaper. Following the acquisition of Erddig by the National Trust in 1973 the Chinese wallpaper was taken down, conserved and rehung by Graham Carr. Since then there have been in situ treatments by Orde Solomons, Sandiford and Mapes Ltd. and Graeme Storey. Chinese wallpapers with almost identical motifs, but with different background colours, are at Cobham Hall, Surrey; Château du Fayel, Oise; Nostell Priory, West Yorkshire (NT 959561, NT 959653 and NT 959654); and in the collection of the Victoria and Albert Museum, London (E.3674-1913 to E.3682-1913). See also Emile de Bruijn, Andrew Bush and Helen Clifford, Chinese Wallpaper in National Trust Houses, Swindon, National Trust, 2014, cat. 15.