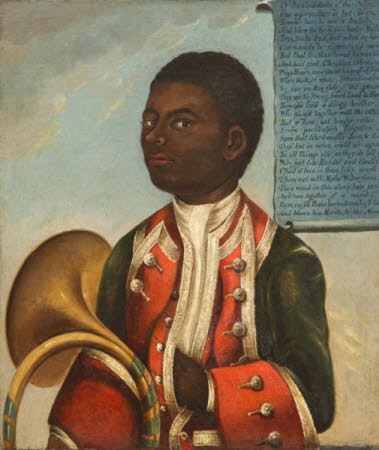 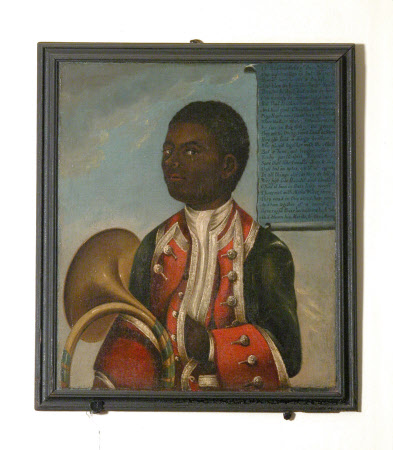 Over the centuries, this portrait has been given many titles indicating the sitter’s identity. We can use them to trace who people thought this man was, or who they wanted him to be. Infra-red analysis of the painting reveals the inscription which reads: ‘John Hanby/Ætatis suae 25’ [aged 25]. Was this the name of the sitter? If so, at some point his name was painted over, possibly when Philip Yorke I added a poem in the top-right corner. The poem commemorated a scarcely remembered black man ‘who blew the horn for Master Meller’ (Yorke’s great-uncle). The poem references enslavement and the man’s burial place, but there is scant evidence that the story in Yorke’s poem is based on reality. Guided by Yorke’s poem and the horn the man is holding, some curators believed the man was a musician. In 1975 and in 1993, the painting was exhibited in several British museums as ‘The Negro Minstrel’, an offensive and outdated phrase even at the time. More recently, the man’s uniform, and Yorke’s suggestion in the poem that there was a second black man in Meller’s household, have led curators to consider this to be a portrait of a coachman. They named the painting ‘John Meller’s Black Coachboy’. If John Hanby was the sitter for this portrait, he was 25 years old when it was painted – clearly a man, not a ‘boy’. This painting is now called ‘A Young Coachman’. We will continue to research the sitter and plan to carry out further technical analysis of the painting.

Oil painting on canvas, called A young coachman, by an unknown artist, inscribed at top right with 26 lines of verse on a scroll, late 18th century. A head-and-shoulders portrait of a young man, possibly posthumous, looking to left, facing, wearing livery, holding a French horn in his right hand, his left hand tucked in his coat. An inscription in the top left, painted over, reads ‘John Hanby, aged 25’.

This portrait was added to the collection of Philip Yorke (1743–1804) as part of an established group of servant portraits at Erddig undertaken by local artist John Walters of Denbigh in the early 1790s and continued by successive Yorkes over the following 150 years. The original set of six were inscribed with rhyming couplets composed by Yorke himself, and seem to have been made to measure for the Servants’ Hall. This painting is of different dimensions and by a different hand to the other servants’ portraits. Yorke’s doggerel is squeezed into one corner. The poem was also published in Yorke's 'Crude-Ditties' (see NT 3081071), under the title 'A Black'. It describes a poorly remembered man, who 'blew the horn for Master Meller' (Yorke’s great-uncle, John Meller (1665-1733)). The presence of black servants in European households was not uncommon in the 17th and 18th centuries, and black children and young adults were portrayed as attendants in portraiture. This portrait is unusual in that it seems to depict a black servant in liveried costume as a subject in his own right. But who is this sitter, and was there really a black man in service in Meller’s household? Infra-red reflectography undertaken in 1996 shows an inscription in the top left corner of the painting that has been painted over, revealing the original sitter to be a John Hanby, aged 25, but without an accompanying date. Yorke doesn’t mention a name in his poem, suggesting that the portrait may have been deliberately acquired by Yorke and subsequently altered to represent stories of a black servant in the household of his great uncle, John Meller. Although the poem references the man’s occupation and burial place, there is currently scant evidence that the story in Yorke’s poem is based on reality. Where did Yorke get his information? Another servant’s portrait might hold the clue: of Jane Ebrell, painted in 1793, at the age of 87. A footnote to the published version of Yorke’s poem on Jane reveals that she was once in service to John Meller, who died when she was 29, in 1733. If there had been a black man (or two) in Meller’s service, she might have been his contemporary. Is it she who provided Yorke with the ‘megre’ information, which ‘can scarcely be remember'd now’? In seeking to verify the existence of a black man in John Meller’s household, researchers have looked for references to skin colour in the Erddig archives. There are two instances: John Meller’s account books record a payment of five shillings to ‘the black’. There is no mention of this person’s name, profession, or the service they provided.[1] In a letter of 16 May 1721 to John Meller, Humphrey Fowlkes, Rector of Marchwiel, wrote: “I know no reason if the Major [David Roberts, Meller’s brother-in-law] send his Black to me to-day but that he may be Christened this morning, if you go abroad before the Holy-day – Whitsuntide was the solemn time among the primitive Christians to Christen the Cate chumens. But we have no number of adult persons to Christen now a days; that day may be public enough.” There is no indication that this man later came to work for John Meller, or what his profession and relationship to David Roberts were.[2] Once John Hanby’s name was revealed, a National Trust staff member trawled the parish registers for Gresford, Marchwiel, Holt, Ruabon and Bangor, seeking Hanbys and potential corruptions of this name. He looked particularly in 1721 to see if a John Hanby or similar was baptised, but didn’t find anything. A number of John Hankeys, Hannabys and Hanabys are present in the registers between 1639 and 1811, but the colour of their skin goes unmentioned. The researcher at the time assumed that this meant that all were white – increasingly, research into the lives of black Britons in the eighteenth century suggests that this might not have been the case.[3] [1] Alastair Laing, ‘The Riddle of Erdigg’s [sic] Coach Boy’, ABC Issue 3 (2007), p. 2 [2] Quoted in Merlin Waterson, The Servants Hall (1980), p.31 [3] For example, D Olusoga, Black and British (2016)

Recto: 26 lines of verse on a scroll, top right: 'Of the Condition of this Negre Our information is but megre; However here, he was a dweller, And blew the horn for Master Meller. Here, too he dy'd, but when or how, Can scarcely be remember'd now, But that to Marchwiel he was sent, And had good Christian interment. Pray Heav'n may stand his present friend, Where black, or white; distinctions, end. For sure on this side of the grave, They are too strong, tw'ixt Lord & Slave. Here also liv'd a dingy brother, Who play’d together with the other, But, of him, yet longer rotten, Every particular's forgotten, Save that like Tweedle-Tum & dee, These but in notes, could [n]e'er agree, In all things else, as they do tell ye, We’re just like Handel and Corelli. O had it been in their life's course T'have met with Massa Wilberforce, They wou'd in this alone, have join'd, And been together of a mind, Have raisd their Horns to one high tune, And blown his Merits, to the Moon'. Recto: Formerly inscr. [top left, painted out, but revealed by infra-red reflectography] 'John Hanby / Ætatis suae 25' Verso: Label: Welsh Arts Council / Pride of Possession 1975-6 / No.29 / The Negro Minstrel