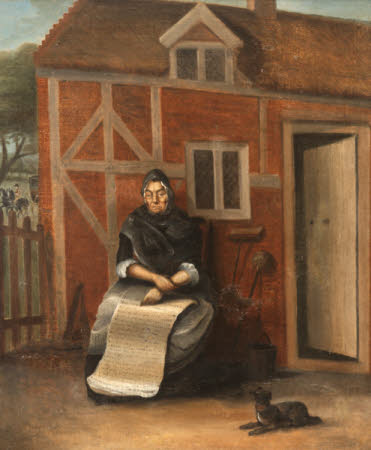 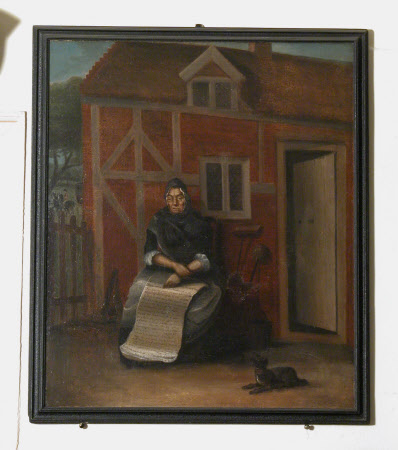 Of the many fascinating and vibrant servants' portraits hung at Erddig, this image of Mrs Jane Ebrell, described as 'Spider Catcher, aged 87' perhaps typifies them all. Ebrell may be portrayed (literally) 'warts and all', but that she is portrayed at all is a demonstration of the esteem in which she was held by the Yorke family, owners of Erddig. For generations after this image, Erddig's servants were memorialised with their own painting (then later photograph), typically situated by their lodgings or workspace, or holding a tool of their trade. The contemporary Yorke would then accompany the image with a short poem about the servant. Ebrell is seen here in front of her lodgings, with broom and mop at her side and holding her poem, which can be read, within the painting.

Oil painting on canvas, Mrs Jane Ebrell (b. 1706), former Housemaid and 'Spider-brusher' by John Walters (1793 - 1797), 1793, inscribed fully on scroll..... Aged 87, she is seated, full-length, outside her cottage, a broom and mop beside her holding a scroll on her lap. She was the wife of the coachman to Simon Yorke I and her son was the coachman to Philip Yorke I. A footnote to the published version of the poem reveals that she was once housemaid and spider-brusher (? laundress- A.L.Cust) to 'Master Meller' (d.1733).

Recto: With 18 lines of verse on a scroll held on her lap: To dignifie our Servants' Hall / Here comes the Mother, of us all; / For seventy years, or near have passed her, / since spider-brusher to the Master; / When busied then, from room to room, / She drove the dust, with burhs, and broom / Anyd by the virtues of her mop / To all uncleanness, put a stop: / But changing her housemaiden state, / She took our coachman, for a mate; / To whom she prov'd an useful gip, / And brought us forth a second whip: / Moreover, this, oft, when she spoke, / Her tongue, was midwife, to a joke, / And making many an happy hit, / Stands here recorded for a wit: / O! may she, yet some years, survive, / And breed her Grandchildren to drive!