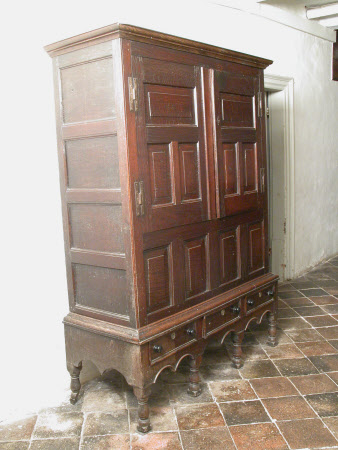 An oak livery cupboard on stand, probably North Wales, late 17th/early 18th century. With later alterations to the cornice, later hinges, and later handles and escutcheons to the stand, which has been reduced in height, but a rare survival. With a moulded cornice above a front of two doors, of three fielded panels with later hinges. The interior a full length hanging space, and fitted with turned pegs. The doors above four fielded panels. The ends of four panels. The back lined with 1in thick backboards. Raised on a stand with upper moulding above three doors with applied edge mouldings and above arched and cockbeaded friezes. The stand's six legs block- and baluster-turned and reduced in height.