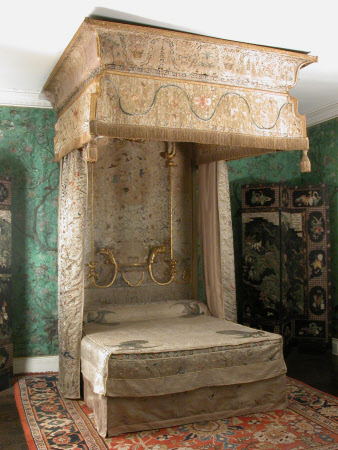 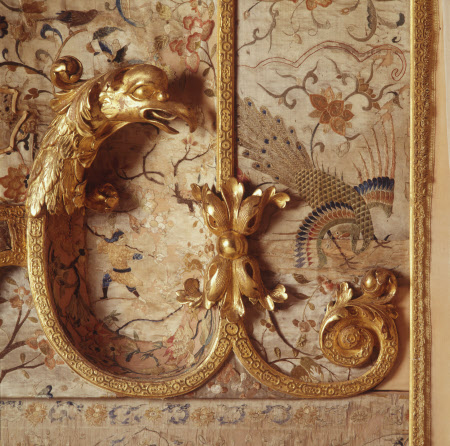 circa 1720 (the textiles possibly earlier)

An 'angel' tester bed, or 'lit a la duchesse', English, 1720, supplied by a 'Mr Hurt' or 'Mr Hunt', possibly John Hutt (fl. 1710-29) upholder of St. Paul's Churchyard. The giltwood and gilt gesso elements possibly supplied by John Belchier (fl. 1717-53). The embroidered silk satin textiles which cover it, Chinese, and possibly earlier. They have been dated to circa 1720 but it is also possible that they were supplied by Elihu Yale (1649-1721) of Plas Grono, who is also thought to have given the late 17th century Coromandel screen also at Erddig [NT 1147113]. Louisa Yorke (1863-1951) recalled in Facts and Fancies that the fabrics on the bed now incorporate the curtains that once hung at the windows of the State Bedroom, which had to be sacrificed to repair the bed in the early 20th century. The bed underwent further restoration by Sheila Landi in 1969. With an unusual tester canopy frame made of oak, together with a headboard, three outer tester cornices, three upper outer valances, three upper inner valances, two curtains, counterpane, three lower valances and two bone graces. The underside of the tester applied with peacocks displaying their tail feathers, of wood with silk overlay. The headboard with a giltwood and gesso overlay, with eagle head terminals and a punched ground. The headboard's cresting in the form of a shell, applied with a conforming peacock. With curtains, bedspread and base valances, all in originally white silk, embroidered all over with Chinese figures, pagodas, birds and flowers. The headboard with an oval scene. Giltwood and cut gesso strapwork borders throughout. The upper valances with silk fringing and tassels at the corners.

Referred to in a letter from Simon Yorke I to his uncle John Meller (d. 1733) of April 1720 in which he wrote that that morning he had called 'upon Mr Hurt to press his sending ye Bed, he is making, on Monday next...'. Mrs. Hurt told him that whilst they had finished 'their worke', 'ye gilding and carving is not ready', imply that the Hurts were upholders and not carvers. Since no upholders with the name Hurt working around 1720 have been identified, the upholstery has been given to various people, including Philip Hunt (fl. 1690) - a cabinet-maker of ‘the Looking Glass & Cabinet’, at the East End of St Paul's Churchyard - for whom a trade card survives, and John Hutt (fl. 1710-29) who was an upholder, and who worked in St Paul's Churchyard. The latter, being an upholder, is much more likely to have made up the bed, and is known to have been working at the same time. In addition, other evidence shows that they made beds. In 1726, when 50 yards of 'Green mantua' were stolen from John Hutt's shop, his wife, Elizabeth, testified that 'a piece of green mantua had been brought here [to their shop] that day and being in haste to use about ten yards of it for a bed...' [Old Bailey Criminal Trials, 31 August 1726]. The similarity of the bed's giltwood and gesso elements to some of the mirror frames at Erddig thought to have been supplied by John Belchier (fl. 1717-53), lend weight to the belief that he too produced the embellishments for the bed. Like the Hutts, he also traded out of St. Paul's Churchyard.. It should be noted, however, that whilst two of Belchier's bills for mirrors and other furniture supplied to Erddig survive in the archive, neither refers to this bed. The bed is currently being examined by textile conservators, and may be the subject of a major conservation and re-interpretation project. Further research, carried out as part of this project, will hopefully shed light on who made the bed.

Purchased by John Meller in 1720, presumed to be the white silk bed listed in the Best Bedchamber in the inventory taken at Erdding in 1726, and in its present position since 1770. Thence by descent, and given by Philip Yorke III (1905-1978) along with the estate, house and contents to the National Trust in 1973.