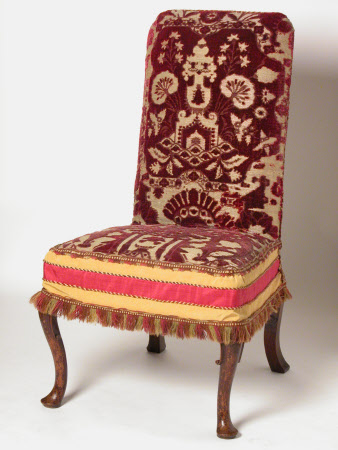 A walnut-framed chair, English, circa 1715-20, one of a set of a four [also including NT 1147097.3, .5 and .6] but part of a larger group of seven with three very similar chairs [NT 1147097.2, .4 and .7]. The rectangular back with rounded top corners. Iron nails to the seat rails for securing the covers. Raised to the front on a pair of cabriole legs, with carved scrolls to the knees, and pad feet. The rear legs rectangular-section and with outswept feet. Covered in red maroon and yellow silk caffoy with a linen weft of c. 1720, but in a configuration that is probably Victorian. The crimson areas are of looped wool with a cut pile, the yellow areas are of voided silk. The seat with a gusset formed from strips of yellow and pink silk, edged with woollen braided cord and with a woollen fringe. The back of the cover of yellow wool moreen.

These seven chairs have traditionally been identified as the remainder of the ‘8 Cafoy walnut Tree Chairs’ – together with a ‘Cafoy walnut Tree Settee’, which has left the house – listed in the ‘Salone’ in the inventory taken at Erddig in 1726, but this may be in doubt, since the group of seven are actually made up of four – 1, .3, .5 & .6. – chairs of one type and three of another – .2, .4 and .7. There are minor differences in the design of the two groups but, more importantly, the seats of the group of four are lower than the seats of the other three. In addition, the group of four retain their original under-covers and stuffing intact, suggesting that they may have been used differently and positioned in a different room in the house. Caffoy is a term found in accounts of the first half of the 18th century for a figured cut velvet with a worsted pile on a silk satin ground. In England, it was largely made in Norwich. Other examples of this rare fabric are found at Houghton and Ham House.