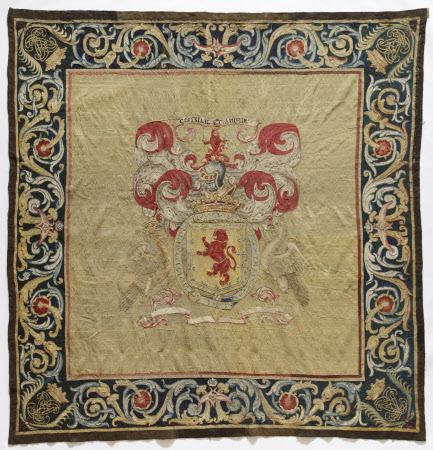 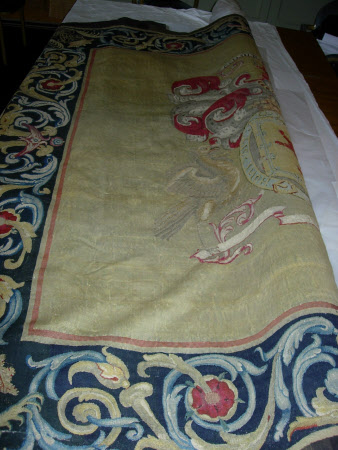 Tapestry, wool and silk, 7½ warps per cm, Armorial Sumpter Cloth from a set of six identical Armorial Sumpter Cloths, Mortlake or Francis Poyntz, London, 1672-74. A square panel with the coat of arms of John Maitland, 1st Duke of Lauderdale in the centre of the plain yellow ochre main field, and a border of dark blue with scrolling acanthus leaves in red, blue and green. The ducal arms are surrounded by the Order of the Garter, awarded to Lauderdale in 1672, and the Maitland motto ‘CONSILIO ET ANIMIS’ ('By Wisdom and Courage') is displayed on a banneret above the crest. The cipher ‘JEL’ for John and Elizabeth Lauderdale appears in each corner of the borders framed by palm leaves and a ducal coronet. The tapestry is unlined and fairly dirty. The middle section of the lower border has been removed and a section of side border from elsewhere in the set has been sewn in, its warp threads going in the opposite direction to the rest of the tapestry. A fragment of linen is attached to the front of the tapestry at the upper right hand corner.

A set of six identical Armorial Sumpter Cloths, tapestry, wool and silk, 7 ½ warps per cm, Mortlake or Francis Poyntz, London, 1672-74. The coat of arms of the Duke of Lauderdale appears at the centre of each tapestry as follows: Or a lion rampant gules couped at all his joints of the field with a royal tressure flory counterflory Azure. Helm mantled Gules and Argent. The crest is a lion sejant affrontee Gules ducally crowned, in his dexter paw a sword of the last, hilted and pommelled Or, and in his sinister a fleur de lys Azure. The supporters are two eagles. The six tapestries appear in inventories of Ham House in 1677, 1679 and 1682, where they are described as 'Sumpter Hangings'. Sumpter hangings or sumpter cloths were used to cover the packs carried by ‘sumpters’ or baggage animals. The use of the six armorial tapestries at Ham as sumpter cloths is suggested by the borders, whose designs all face outwards (making them hard to read if attached to a wall), and by the survival of a small metal eyelet set within a strip of linen sewn to the back of one of them, perhaps used to secure the cloth over a pack animal. All six panels also show signs of being used as wall-hangings, including traces of paint on the surface and nail holes. The tapestries can be dated on the basis of the ducal coronets and the Garter to between 1672 (when Maitland was created both Duke of Lauderdale and KG) and Lauderdale's death in 1682, but the appearance of 'Sex pieces of Tapestrie Hangings wt my lords Armes' in a 1674 inventory of the Duke of Lauderdale's goods at Lethington in Scotland strongly suggests they were in fact woven between 1672 and 1674 (Wyld, forthcoming a). The sumpter cloths were made either by Francis Poyntz, the Royal Arrasworker, or at Mortlake. Payments for tapestries were made to both during the 1670s (Wyld, forthcoming a). Poyntz is known to have supplied sumpter cloths to the crown and other patrons in the 1670s, but none survives. On the other hand a set of five tapestries at Boughton House woven between 1672 and 1683 for Ralph Montagu, later 1st Duke of Montagu, is very similar in design to the Ham House 'Sumpter Cloths', with a central coat of arms, scrolling acanthus leaves in the borders and outward-facing monograms at the corners, and has been attributed to Mortlake (Wyld, forthcoming a; Hefford 1992, pp. 102-3). (Helen Wyld, 2011)

Ham House, the Dysart Collection (purchased by H.M. Government in 1948 and transferred to the National Trust in 2002)

Above the coat of arms: CONSILIO ET ANIMIS On the garter surrounding the arms: HONI SOIT QVI MAL Y PENSE Monogram in each corner: JEL