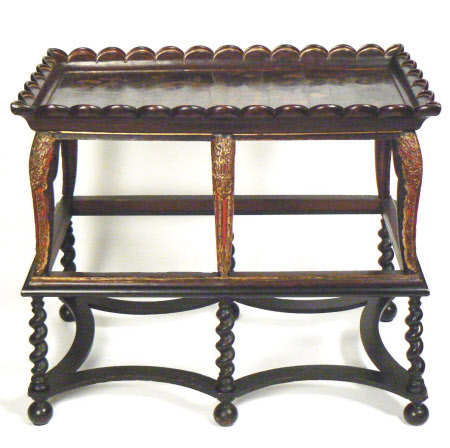 A tea table, possibly Javanese, circa 1650, in cedarwood with lacquer and gilding, raised on an English lower section of ebonised turned beech. The table has a fixed tray with cusped edges picked out in gold, lacquered with a scene of figures in a landscape with trees and elephants, on six cabriole legs decorated on a red ground with gilding on low relief carvings. The English base on twist-turned legs with ball feet joined by a serpentine stretcher. The lower section was added to raise the table to a height more suitable for European usage. This table is listed in the Duchess' Private Closet in the inventory of 1679 and was probably acquired with the lacquer tray (NT 1140033). A similar lacquer table (without the English base) is at Dyrham Park (NT 452980). The Javanese origin of this piece is not certain but the use of floral and animal patterns carved and gilded in high relief on a painted or red lacquer background was practised on Java. If some of the motifs seen on the tables are Chinese, others have been identified on Javanese fabrics (see Emile de Bruijn, 2013). These tables were originally made in the context of floor-sitting culture and they would have been heightened on stands when used in Europe. As per the houses' inventories, they have functioned as "tea table" (described as a "large tea table" in the 1703 Dyrham inventory). A dutch painting attributed to Roelof Koets II (c.1650-1725) illustrates how such tables (raised on a European stand) were indeed used for the consumption of tea which was still an exotic and expensive drink. Two similar tables can also be found at Schloss Charlottenburg in Berlin (SPSG IV 2843 & 2844).

Listed in the Duchess's Private Closet in the 1679 Ham inventory: "One table painted black and gould"; in 1683: "One Tea table, carv'd and guilt". As can be seen in a watercolour by H.W Brewer, this lacquer table was in The Queen's Bed Chamber in 1886 (private collection). Acquired in 1948 by HM Government when Sir Lyonel, 4th Bt (1854 – 1952) and Sir Cecil Tollemache, 5th Bt (1886 – 1969) presented Ham House to the National Trust, and entrusted to the care of the Victoria & Albert Museum, until 1990, when returned to the care of the National Trust, and to which ownership was transferred in 2002.