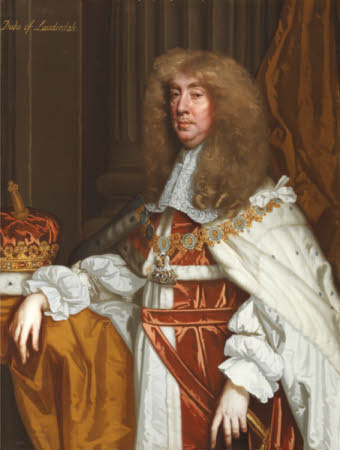 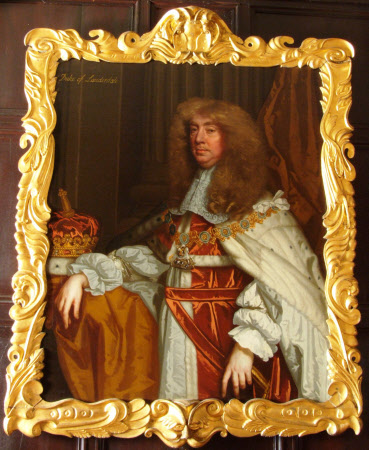 Oil painting on canvas, John Maitland, Duke of Lauderdale (1616-1682) in Garter Robes by Sir Peter Lely (Soest 1618 – London 1680), circa 1672. A three-quarter-length portrait of a man turned to the left, gazing at the spectator, his right arm resting on a ledge his left arm by his side, wearing a large brown wig and dressed in Garter robes with his coronet on the ledge on the left, drapes forming the background. He was known as 'Red John' because of his colouring and a contemporary described how 'his tongue [was] too big for his mouth, which made him bedew all that he talked to'. He was one Charles II's leading advisors and Secretary of State for Scotland, between 1661 to 1680, virtually ruling the country on the king's behalf but his corrupt methods and imperious behaviour eventually led to his downfall. Following the death of his first wife, Lady Anne Home, in 1671, he married Elizabeth Murray, Countess of Dysart in 1672.