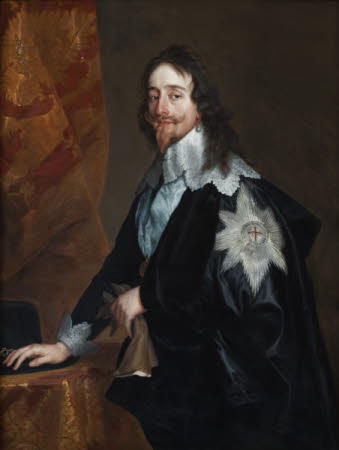 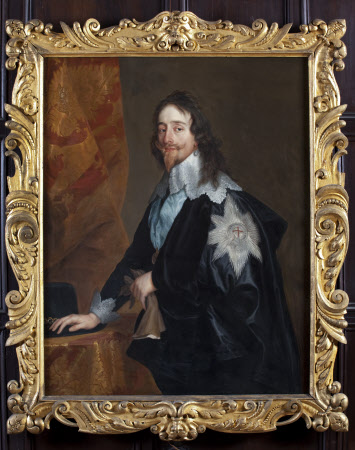 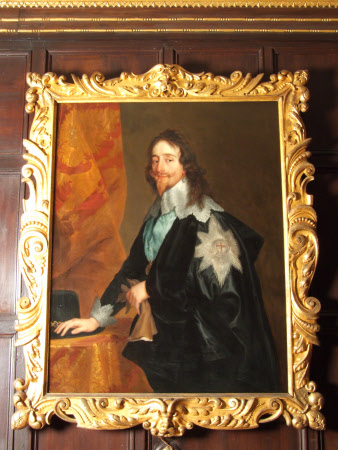 Charles I rewarded his boyhood companion William Murray, 1st Earl of Dysart (c.1600-1655) with many gifts, including the house itself. This portrait pleased the king so much that he asked Van Dyck to make a copy as a present for William. The frame was part of the gift, and now the Long Gallery is hung with frames made in a similar style.

Oil painting on canvas, King Charles I (1600-1649) by Sir Anthony Van Dyck (Antwerp 1599 - London 1641) and Studio, circa 1635/7. A three-quarter-length portrait, turned to the left, gazing at the spectator in black with white collar, wearing the Ribbon and Order of the Garter, turned to left, head turned, gazing at spectator over his left shoulder, his right ungloved hand on a table on the right, his left ungloved hand holding a glove, in black dress, wearing the Ribbon and Order of the Garter. There are many versions of this type of portrait of the King by Van Dyck including another at Kedleston Hall (NT 108902) and two at the National Portrait Gallery, London. The original painted between 1635-7 is said to have been destroyed in the Whitehall fire of 1697. Another painted for Charles I's nephew, Charles Louis, Elector Palatine KG (1617 – 1680) and bearing the date 1637, formerly in the Imperial Collection in Prague, is now in the Gemäldegalerie in Dresden. The Ham version was probably given to William Murray by the King, as indicated in a Memorandum of Pictures bought by the King from Van Dyck dated 1638-9 which reads - 'Le Roi vestue de noir a Monr. More, doubtless a French variant of Murray.