Danaë and the Shower of Gold 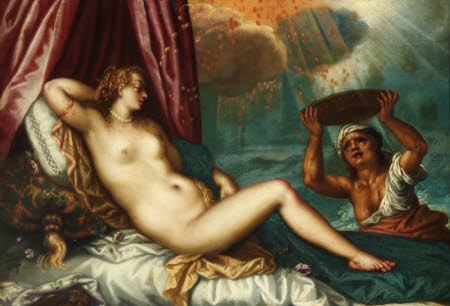 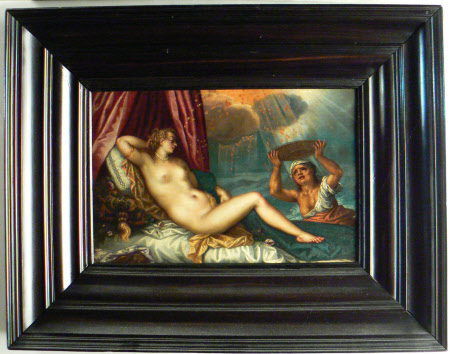 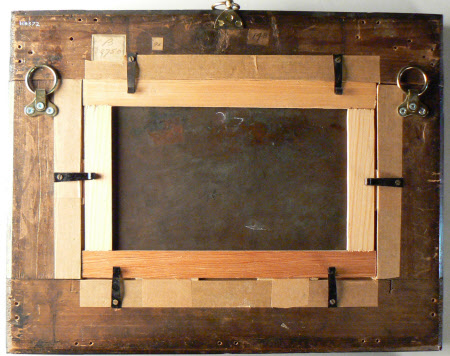 Oil painting on copper, Danaë and the Shower of Gold, after Hans Rottenhammer I (Munich 1564 – Augsburg 1625), before 1625. Danaë reclines on a bed, her head to the left of the picture and her right side to the viewer. She has golden, plaited hair, pinned up, and is naked except for a pearl necklace and jewelled bracelet, and for the green bed-linen, which is draped over her left leg. Her right arm is behind her head, by embroidered cushions; her left hand rests on her left thigh. Pink roses are strewn on the bed. To the lower right, a muscly maid-servant with olive skin holds a bronze dish above her head with both hands and looks skyward. Above her, orange streams of light emerge from the clouds, and red droplets rain down. As recounted in the Roman poet Ovid's Metamorphoses IV, Danaë, daughter of Acrisius, King of Argos, and of Eurydice (Aganippe) was imprisoned in a brazen tower (or a tower with bronze doors), because an oracle declared she would bear a son who would kill his grandfather. Jupiter (Zeus) visited her as a shower of gold through the roof of her prison and she gave birth to Perseus. Acrisius attempted to drown the mother and son by putting them out to sea in a chest but they were rescued. Perseus fulfilled the prophecy when he accidently killed his grandfather with a discus during the public games. The original painting was given to Charles I by Robert Kerr, Ist Earl of Ancram (1578-1654), Ambassador to Frederick Hendrik, Stadholder of Holland and fellow collector. William Murray gave Charles or exchanged another Rottenhammer of Venus, Cupid and Satyrs.