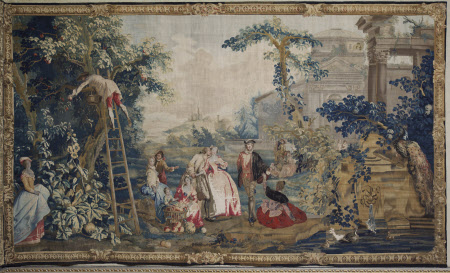 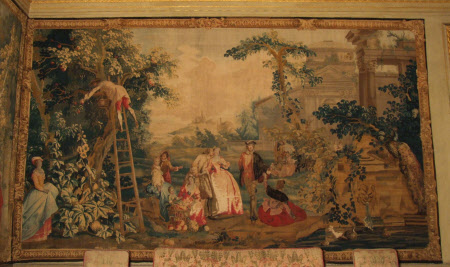 Tapestry, wool and silk, 8 warps per cm, The Dance from a set of four Pastorals, William Bradshaw, London, after Antoine Watteau, Nicolas Lancret and Jean-Baptiste Pater, c. 1734-1740. To the left a man at the top of a ladder picks fruit from a tree, and a woman stands below holding out her apron to catch the fruit. In the centre a young man extends a hand to a woman sitting on the ground, a man whispers in the ear of a young woman, a woman sits on a bank with a man gesturing beside her, and two girls play by a large basket of apples. To the right there is a pool of water before a stone wall and a lion-mask fountain, ducks swimming in the water and a peacock perched on the wall. Beyond there is a ruined marble portico and in the right background a building with a pedimented entrance and a shallow domed roof. The borders take the form of a carved and gilded picture frame with scrolling decorations at the corners and at intervals along each side. The left hand border has been cut off and re-attached, shortening the main field of the tapestry by around a foot.

'Fruit Picking' is composed of figures taken from at least seven images. The young man up a ladder and his lady companion waiting below to catch the fruit come from 'La Terre', one of a series of four 'Elements' engraved by Charles-Nicolas Cochin after Nicolas Lancret, published in 1733; the standing couple in the centre is after 'Le Baiser Donné', one of a pair of amorous subjects by Jean-Baptiste Pater, engraved by Pierre Filloeul, also in 1733; the man in the centre is after one of Antoine Watteau’s most famous figures, 'l’Indifférent', engraved by Gérard Scotin in 1729, whilst the woman he helps to her feet is taken from Watteau’s 'l'Embarquement pour Cythère', engraved by Nicolas-Henri Tardieu in 1733. The couple in the right background is from Watteau’s 'l'Accord Parfait', engraved by Bernard Baron in 1730, whilst the seated women by the ladder is after Benoît Audran’s engraving of Watteau’s 'l'Enchanteur' of c. 1727, although her companion is not. The lion-mask in the right foreground and the classical buildings behind are taken from Watteau's 'La Mariée de Village', engraved by Cochin in 1729. The four 'Pastoral' tapestries that hang in the Queen's Bedchamber are not united by any narrative theme, they represent simple countryside pass-times of fruit gathering, dancing, music making and playing on a swing. The designs, although they appear unified, are in fact based on an assemblage of figures taken from different printed sources, all after Antoine Watteau and his two principal followers, Jean-Baptiste Pater and Nicolas Lancret (many of the print sources were identified in MacColl 1917b). The tapestries were designed to appeal to the well-known English taste for paintings by Watteau in the eighteenth century. The tapestries are signed 'BRADSHAW' for William Bradshaw (1700-1775), the foremost tapestry producer in London from the early 1730s to the mid 1750s. Bradshaw had workshops on the corner of Soho Square with back premises extending down the west side of Greek Street, and from here he ran a thriving business as an upholsterer, with tapestry making just one aspect of his activity (Beard, 2002; Sheppard, 1966; Wyld, forthcoming). From the late 1730s until the mid 1750s Bradshaw worked for the 4th Earl of Dysart at Ham House, and his work included fitting out the Queen's Bedchamber where the 'Pastoral' tapestries hang. The 'Pastoral' tapestries were installed at Ham in April 1742. They had in fact been made for another of Bradshaw's clients, Henry O'Brien, 8th Earl Thomond (1688-1741) for his house at Shortgrove in Essex. Thomond died suddenly in 1741 and the contents of his houses was sold. Bradshaw was employed to value the furniture, and he attended Thomond's sale and bought a number of items, including the four tapestries for £184. The bill for the tapestries was paid by the Earl of Dysart, and they were altered slightly before being installed in the Queen's Bedchamber at Ham (Wyld, forthcoming b). The 'Pastorals' were Bradshaw's most popular set of tapestry designs. A number of examples, all including a selection of the four scenes at Ham (with small variations in the figures), have surfaced on the art marked in the twentieth century (Franses archive; Marillier tapestry subject archive; Getty Photo Study Collection). Other than the set at Ham the only weavings to remain in their original setting are two suites at Holkham Hall, Norfolk. (Helen Wyld, 2011)

Ham House, the Dysart Collection (purchased by H.M. Government in 1948 and transferred to the National Trust in 2002)