Classical Ruins with Christ and the Woman of Samaria 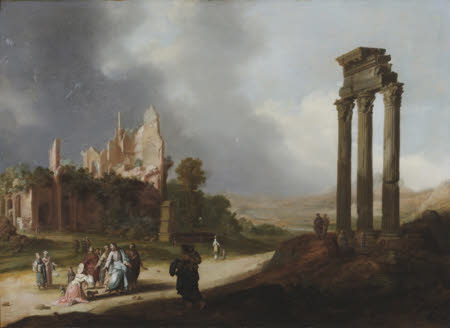 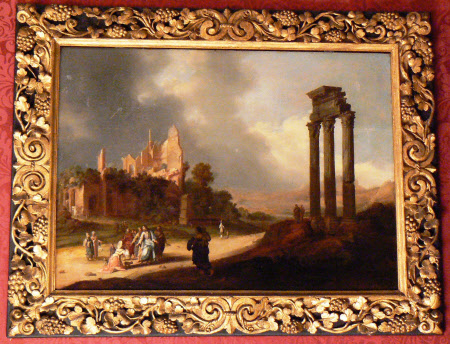 The scene is taken from the biblical Gospel according to John (4:1-30). The woman from Sychar in Samaria, a town whose inhabitants the Jews considered outcasts, was the first person to whom Christ revealed himself as the Messiah, thus demonstrating that his mission of love and forgiveness was to all humanity. The Samarian woman has drawn water from Jacob’s Well and encounters Christ who has paused at midday on his way from Judaea to Galilee and asked her for a drink. As an adulteress, with five husbands and living with another man and ostracised by her own people, she was astonished but Christ said: "Everyone who drinks the water will be thirsty again, but whoever drinks the water I shall give him will never suffer thirst anymore."

Oil painting on canvas, Classical Ruins with Christ and the Woman of Samaria by Bartolomeus Breenbergh (Deventer 1598 – Amsterdam 1657), signed and dated bottom middle: B.Breenbergh 1635. Christ bottom left with a group of woman around him, with three Corinthian columns topped with a section of entablature to the right, and further ruins to the left. To the right are the three Corinthian columns of the Temple of Castor and Pollux in the ruins of the Forum in Rome. The background ruins are derived from a composition by Jan Asselyn.

Verso: Inscription in ink on back: A Landskip of Christ & the Woman of Canaan by Breenbergh Pret 12.