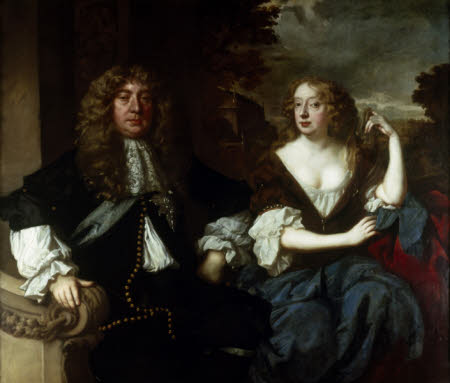 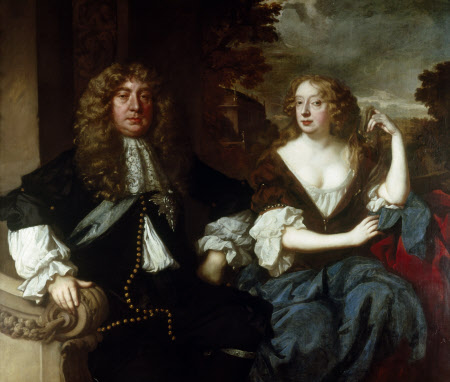 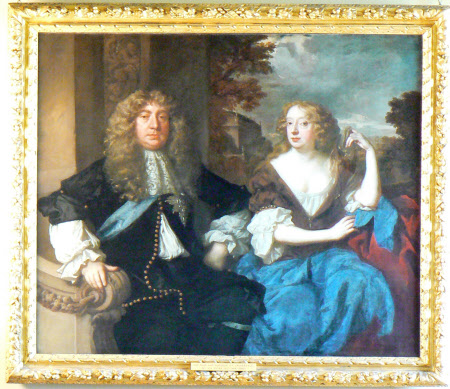 Oil painting on canvas, John Maitland, Duke of Lauderdale (1616-1682) and Elizabeth Murray, Countess of Dysart and Duchess of Lauderdale (1626-1698) by Sir Peter Lely (Soest 1618 – London 1680), circa 1675. Two three-quarter-length portraits, both seated, the Duke to the left the Duchess to the right. The couple are wearing contrasting styles of dress. The man is proudly formal whilst she is in the informal dress of her own apartments. He wears a partially opened gold-buttoned black coat with short sleeves buttoned back in a cuff, revealing full white linen sleeves with ruffle at the wrist, the Garter star embroidered on his coat. He also wears black breeches, black stockings and the Garter. A full-bottomed wig descends to either side of his elaborate falling lace cravat. His left hand rests, knuckles down on his left knee and his right hand grasps a heavily carved ornamental stone seat. The Duchess wears a low-cut white under-smock with full white sleeves gathered at the elbow, over the smock she wears a very low cut brown 'nightgown'. Over her lap lies a bluish drape and she holds in her left hand, which is raised to the level of her face a gold gauze scarf. The background reveals an Italianate house with sculptured figures and the distant view of a town and a landscape of trees. For the frame, see NT 1140651.

The Duchess of Lauderdale (c.1626-1698), born Elizabeth Murray, had succeeded her father in 1655 to the Earldom of Dysart and had inherited Ham House from him. Earlier she had married Sir Lionel Tollemache who died in January 1669. In 1672 she married Lauderdale (1616-1682), who in the same year was raised to the dukedom and created Knight of the Garter. He wears the ribbon and star of the order in this painting. In the Interregnum the Countess of Dysart had been one of Lely's most active patrons, and the portraits he painted for her at that date are among those that she later set up in the Long Gallery at Ham, where they remain to this day in their original carved frames. She was one of the most politically minded and rapacious ladies of her day, well matched with Lauderdale who as Secretary of State for Scotland from 1660 to 1680 was immensely powerful. He was also singularly violent and unattractive ('very big; his hair red, hanging oddly about him: His tongue was too big for his mouth which made him bedew all that he talked to...his whole manner was rough and boisterous and very unfit for a Court.'), but he was learned and clearly a man of considerable taste. He and the duchess made Ham one of the most beautiful houses of its period. Happily, it is one in which much of the splendid original decoration and much of the collections they assembled and commissioned can still be seen. On 27 August 1674, John Evelyn described it as 'indeede inferiour to few of the best Villas in Italy itselfe, The House furnished like a greate Princes.' This double portrait was listed in the inventory of 1679 as hanging in the Great Dining Room at Ham: 'Both ye Graces in on[e] picture wt Gilt frame.' At that time it was valued at £80. It hangs in the same place today. Probably painted around 1675, it is apparently the last of a number of portraits of the Lauderdales commissioned from Lely. The rather dry pigment and cool, blond tone are characteristic of Lely's style in the last decade of his career. Sir Oliver Millar in Gervase Jackson-Stops (ed.), Treasure Houses of Britain, Five Hundred Years of Private Patronage and Art Collecting (exh. cat.), National Gallery of Art, Washington, New Haven/London, 1985.

Not in 1677 inventory [so either not yet painted, or not yet transported to Ham House] but in 1679 inventory as in 'The Great Dining Room. Both ye Graces in one picture wt Gilt frame'; thence by descent until acquired in 1948 by HM Government when Sir Lyonel, 4th Bt (1854 – 1952) and Sir Cecil Tollemache, 5th Bt (1886 – 1969) presented Ham House to the National Trust, and entrusted to the care of the Victoria & Albert Museum, until 1990, when returned to the care of the National Trust, and to which ownership was transferred in 2002