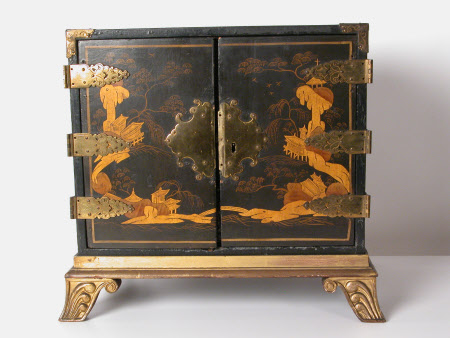 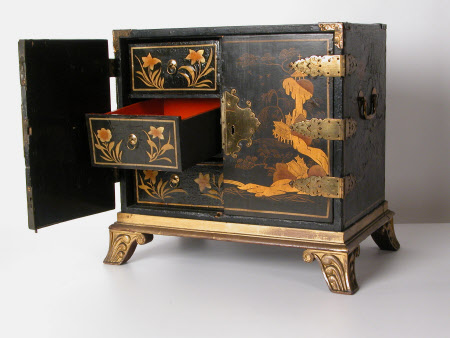 Rather than serving a purely practical purpose, cabinets were used for show. Often they contained ‘curiosities’ such as shells, jewels or relics that the owner would show to their friends. This miniature cabinet was probably used to house part of the Duke’s collection, and is of the same style as the Japanese Lacquer Cabinet in the Long Gallery.

A miniature cabinet with japanned decoration, probably English circa 1675, on a later giltwood stand. Opening with a pair of doors decorated with oriental landscapes of trees, rocks and houses, imitating lacquer, opening to an interior fitted with five drawers, with floral decoration to the front. The cabinet is mounted with three engraved brass hinges to each door, corner mounts and a brass keyhole escutcheon. The top and sides are decorated with foliage and flowers. it is raised on a later stand with four bracket feet carved with scrolls. The 1670s inventories of Ham House record several ‘Indian boxes' which were probably small boxes or miniature cabinets of Oriental lacquer or japanned decoration as the present example.

The Chinese symbol 'I' is inscribed