Venus and Adonis (after Titian) 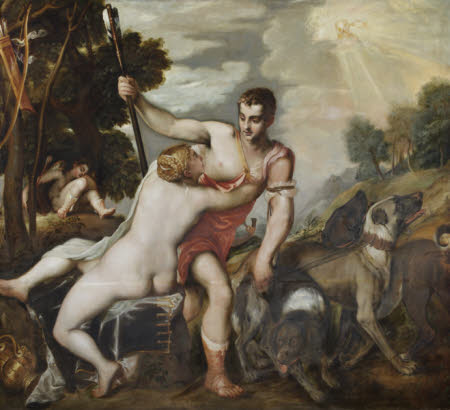 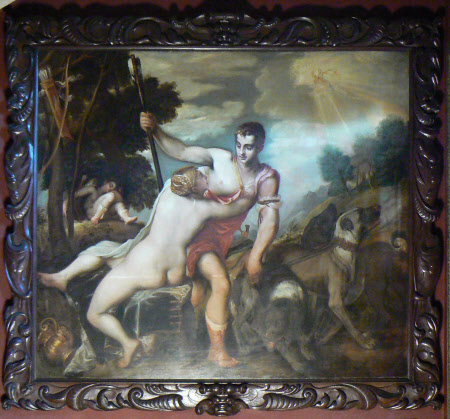 Oil painting on canvas, Venus and Adonis (after Titian), attributed to Miguel de la Cruz (active c.1630-1660). Adonis strides to the right of the scene, with a nude Venus clutching his chest, three hunting dogs to his left. As related in the Roman poet Ovid’s Metamorphoses (10:665-740), Venus fell in love with the handsome, but mortal, hunter Adonis. Because of her divinity she foresees his tragic fate. He ignores her plea to refrain from the hunt one day and is fatally wounded by a boar. The moment of his departure is dramatised here by Venus's contorted pose (derived from a famous antique relief) whilst her son Cupid, the god of love, sleeps in the left background. Of the many versions of this composition, the one now in the Prado, Madrid, painted around 1553/4 for Philip II of Spain, is generally regarded as autograph, although the Cobbe Collection (476) one at Hatchlands (NT 1166206) could be a prototype. King Charles I owned four pictures of Titian’s Venus and Adonis but it is not known if they were all copies of the same version or copies of four different versions. The Ham painting is the Prado type and could have been copied in Spain by Michael Cross - as Cruz was called in English - or from the National Gallery, London version where Cupid is seen asleep but includes Venus’s carriage in the sunburst at the upper right. Other versions, at least in part by Titian himself, are at the J.Paul Getty Museum, Malibu and in the National Gallery, Washington, where Cupid is younger and awake and only two dogs are visible, and at the Metropolitan Museum, New York (ex-Darnley collection) and Torlonia Gallery, Rome.