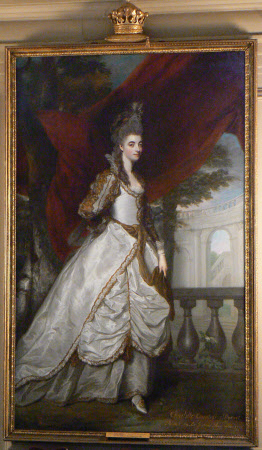 Charlotte Walpole was the youngest of the three illegitimate daughters of Sir Edward Walpole (1706-1784) and niece of the author, Horace Walpole (1717-1797). In 1760 she married Lionel Tollemache, Lord Huntingtower, son of the 4th Earl of Dysart (1734-1799), who wed her in secret without the knowledge or consent of his father. He became the 5th Earl of Dysart in 1770. This grand portrait of the sitter as Countess was exhibited at the Royal Academy in 1775.

Oil painting on canvas, Charlotte Walpole, Countess of Dysart (1738-1789) by Sir Joshua Reynolds (Plympton 1723 - London 1792), painted inscription, bottom right: Charlotte Countess of Dysart / Painted by Sir Joshua Reynolds 1775. A full length portrait of the illegitimate daughter of Sir Edward Walpole, granddaughter of Sir Robert Walpole and niece of Horace Walpole who married the 5th Earl of Dysart in 1760. She stands on a terrace, turned to the right, and glancing over her right shoulder at the spectator. She wears a full length dress with low cut bodice, and overskirt and stands beneath a tree, with a balustrade and wall of niches behind her and a large red billowing drape from right to left. In the background to the right there is a wall with a stone archway and topped with a balustrade. She wears a similar dress to that of Susannah Trevelyan (Miss Suky), Mrs Hudson by Thomas Gainsborough and another hand (allegedly altered by Reynolds in 1777) of 1771 at Wallington (NT).