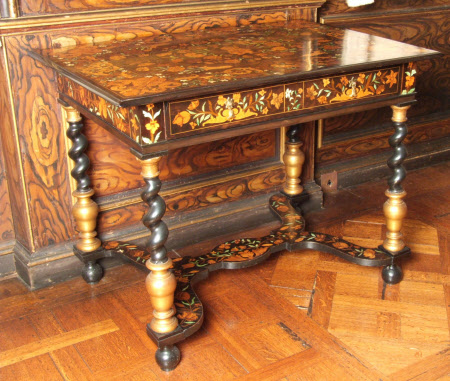 A table, or side table, circa 1675, possibly by Gerrit Jensen, pine and oak carcass partly gilded, ebonised and veneered with floral marquetry including ivory and stained horn. The top is divided by stringing into three sections with a broad band and an oval central panel flanked to each side by a medallion. overall decorated with scrolling acanthus, flowers and birds within laurel wreaths. The central panel with two cornucopiae issuing floral bouquets, held by a winged cherub. The frieze similarly decorated to the sides and front, opening with a long drawer mounted with a brass handle and a star-shaped backplate. The spirally turned legs headed by gilded capitals and terminated with baluster-shaped lower sections, joined by a serpentine stretcher decorated with similar marquetry, on ball feet. A mirror with similar floral marquetry (NT 1139551) was possibly made en suite with the present table as in England a set of marquetry furniture often comprised a "looking glass". Gerrit Jensen was supplier of veneered furniture to the Duke and Duchess of Lauderdale as per records of payments from May 1672 until October 1683. Two comparable marquetry tables at Ham are also thought to be his work (NT1140043, NT 1139923), as well as a cabinet (NT 1140106) . Gerrit Jensen most probably came from Holland and settled in London before 1667. He is known to have supplied fine marquetry furniture to the court and prestigious patrons from the 1680s. In 1670s floral marquetry was a novelty and according to Reinier Baarsen this furniture at Ham suggests that floral marquetry was the speciality with which Jensen conquered the London clientele a few years later. Most likely a Dutch-born cabinet maker, he would have brought the art of floral marquetry with him, introducing this technique in England such as Cornelius Gole, following Pierre Gole (c.1620-1685) in Paris and Leonardo van der Vinne (active c.1659-1713) in Florence.

This table was possibly identified by Peter Thornton with an entry in the Ham House's 1679 inventory, in Lord Huntingtower's Apartment (Elizabeth Dysart's second son), where a "triad" of marquetry furniture is listed, of which the table and mirror would have survived. Acquired in 1948 by HM Government when Sir Lyonel, 4th Bt (1854 – 1952) and Sir Cecil Tollemache, 5th Bt (1886 – 1969) presented Ham House to the National Trust, and entrusted to the care of the Victoria & Albert Museum, until 1990, when returned to the care of the National Trust, and to which ownership was transferred in 2002.