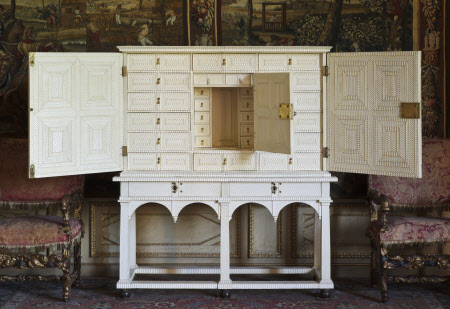 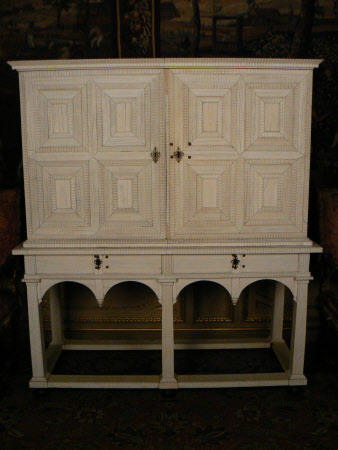 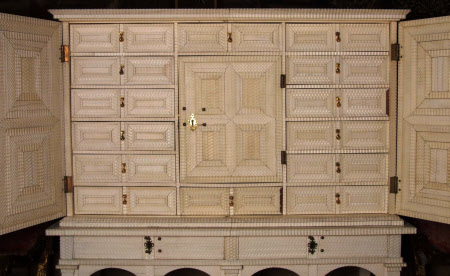 This is one of the most prized possessions in the house and was used to impress the most important guests, first in the Queen’s Antechamber and later in the North Drawing Room where it can still be seen today. Ivory was as valuable and rare then as it is now, making this an immensely expensive and exotic object.

A cabinet on stand, circa 1650-60, veneered with rippled plaques and strips of ivory arranged geometrically. The rectangular body surmounted by a narrow cornice, opening with a pair of doors, each divided in four panels, revealing an interior fitted with fourteen drawers and a central door, opening to a niche flanked by five small drawers to each side and a further pair of drawers to the top. Two secret drawers and a secret compartment are dissimulated behind. The doors are mounted with brass foliate keyhole escutcheons. The cabinet stand is similarly veneered with ivory, opening with two frieze drawers, each with a brass foliate keyhole, on five legs in the form of square columns of Doric inspiration, joined by a flat stretcher, on bun feet. The architectural design of the stand is reminiscent of the classicism of the leading Dutch architects Jacob van Campen (1596-1657) and Pieter Post (1608-1669). This mid-seventeenth-century ivory cabinet is exceptional, there is no other example known. Its simple form and its large scale combined with the decorative effect of the arrangement of the ivory plaques and strips have led to suggest Northern Netherlands as its origin. In the mid-seventeenth century ivory was in demand in Holland for the decoration of fine cabinet work but there is no record of furniture solely veneered with this very costly material. However, a set of furniture veneered with ivory was brought from Brazil by Count Johan Maurits of Naussau-Siegen as he returned in 1644, after eight years as Governor. He installed his set of ivory furniture in his house at The Hague (nowadays known as the Mauritshuis) where it was greatly admired. Consequently, the cabinet at Ham House may have been created in The Hague in the 1650s, following the sensation made by the Brazilian set of ivory veneered furniture. The ivory cabinet at Ham House also appears to be a rare precursor as it encloses a fully fitted interior. Indeed, most Dutch two-door large cabinet on stand, characteristic of the late seventeenth century, normally have shelves inside. The Dutch ebony cabinet at Ham House has a very similarly fitted interior (NT 1139780.1).

First described in the 1677 inventory, it must have come to the house after 1655 when the first inventory was compiled. In 1677 it was in the North Drawing Room but was moved to the State Bed Chamber soon after: 'One white Ivory Cabinet wth. a paragon Case [& annotated] put in ye queens Chamber'. As can be seen in a watercolour by H.W Brewer, it was in the North Drawing Room in 1886 (private collection). Acquired in 1948 by HM Government when Sir Lyonel, 4th Bt (1854 – 1952) and Sir Cecil Tollemache, 5th Bt (1886 – 1969) presented Ham House to the National Trust, and entrusted to the care of the Victoria & Albert Museum, until 1990, when returned to the care of the National Trust, and to which ownership was transferred in 2002.

Underside.: 'Repaired by Tiller' in type.