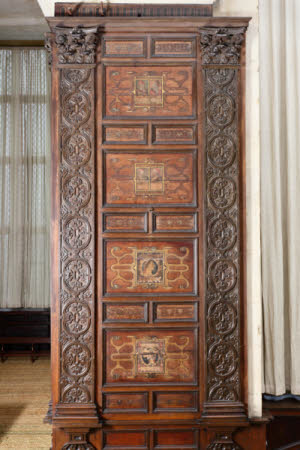 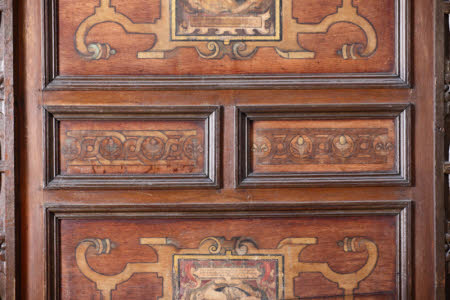 One of four decorated wall panels in the High Great Chamber around the window piers going into the large window bay on the west side of the room, this one being on the west wall on the north pier of the window bay. This includes the four portrait prints applied directly to the panelling. These panels may be contemporary with the building of the house and we assume the decoration was also contemporary. Apparently these panels may well have been installed during Bess’ son’s lifetime, possibly around 1610 so not quite contemporary with the building of the house in the 1590s. The arrangement may have been changed during the mid 19th century. They consist of geometrically arranged oak panels running from the floor to the cornice height on the frieze, divided into rectangular and triangular panels, bordered by carved pilasters on each side, and baluster type pilaster on the dado. The panels of the dado are plain. The panels above the dado are decorated with painted strapwork and have applied canvas and paper painted panels. Most of the larger panels are split, these splits in some cases run through the applied paper panels. Construction: The panelling is such that the mouldings on the framework are applied to the rails and that the panels themselves are housed into grooves in these mouldings, consequently if the panelling is to be dismantled or the panels to be taken out, the whole structure would have to be taken apart to take each individual panel out of its housing. Although it appears in some cases that the panels are sitting in rebates and retained with either nails or beads from the rear. This would make their removal easier as they could then be taken out from the back without dismantling the framework. This applies only to the flaking panels. The framework is generally morticed and tenoned with pegs although the diagonal rails do not appear to have tenons into the long stiles. It does not seem to be too securely fixed, it appears to be nailed along the outer edges into mortar joints of the masonry and in some cases there are some iron holdfasts into the masonry and nailed into the edge of the panel frames. There are in all two wider sections of panelling leading into the reveal of the bay and two narrower sections running across the piers into the room itself. There is also a plain decorated timber frieze running above the panelling itself, but under the masonry cornice. The section of narrower panelling on the south side of the window bay (i.e. to the left of the bay within the room itself) seems to have been badly damaged in the past and repaired in various areas. This is probably due to water coming either down the wall or through the wall, there are some patches in the framework near the capital of the pilaster on the top left hand side, and the panels themselves have been repaired using dovetail keys through the face and the whole surface seems to be either water or light damaged as well and in the second large rectangular decoration down from the top there is a large patch missing from the central decorated panel. There are in all sixteen large rectangular panels and twelve other smaller panels with applied decoration. All of the other panels have some painted decoration at least. The framework is also all painted with the flat part of the frames grained and the mouldings stained or painted darker. The carved applied pilasters are also painted with a dark glaze layer. The panels that appear to be triangular under the diagonal rails are in fact longer panels in the form of a tapezium. In some cases the diagonal rails are actually applied to the face of the panels and nailed through.