A Man Presenting Gifts to a Queen 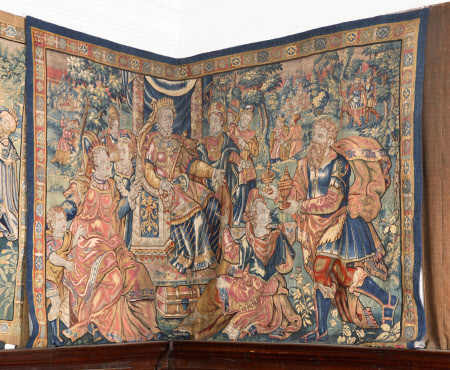 Tapestry, wool and silk, 5 warps per cm, A Man Presenting Gifts to a Queen from a set of six Old Testament Subjects, Oudenaarde, c. 1575-1595. A queen seated on a throne receives a man who approaches offering her two golden vessels. There is a treasure chest underneath the throne and female attendants at either side, a seated woman with a small boy in the left foreground, and in front of the throne a woman half-reclining on the ground, pointing upward at the queen and looking at the man with the golden vessels. In the left background there is a small scene of three figures in a landscape pointing to a distant city, in the right background a man and woman talking, and further back a man carrying a rod or sceptre leading a small band of soldiers. The tapestry has a narrow border with a pattern of alternating fleurs-de-lys and flowers in lozenges, and a wide dark blue galloon.