A King and Queen sending Away Two Boys, and two Women being Separated 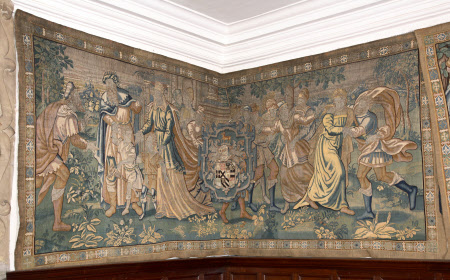 Tapestry, wool and silk, 5 warps per cm, A King and Queen sending Away Two Boys, and two Women being Separated from a set of six Old Testament Subjects, Oudenaarde, c. 1575-1580. A long narrow tapestry with a coat of arms in the centre and a narrative scene on either side. On the left a king and a queen, both wearing crowns, usher two small boys towards a man who approaches, half crouching, from the left hand side. One of the boys rides a hobby horse, and the queen is followed by three female maidservants, one of whom carries the train of her dress. On the right a woman is manhandled by two men, one dressed as a soldier, and throws out her arms as they drag her away from a second woman, who is either turning to or being pulled away by a bearded man in a blue tunic. A small group of figures watches from the left, partly hidden by the coat of arms. The tapestry has a narrow border with a pattern of alternating fleurs-de-lys and flowers in lozenges, and a wide light yellow galloon. The initials 'CH' are woven in light blue into the lower galloon below the coat of arms. The left hand scene with two boys being sent away, and the figures behind the coat of arms in the centre, are identical to figures found in another tapestry in the set, no. 1129465.3.

Made for Sir Christopher Hatton, c. 1575-80, and presumably hung at Holdenby Hall; on Hatton’s death in 1591 inherited by his nephew Sir William Newport (later Hatton); July 1592 purchased by Elizabeth, Countess of Shrewsbury for Hardwick Hall; thence by descent to Andrew, 11th Duke of Devonshire (1920-2004); acquired through the National Land Fund in 1956 and transferred to the National Trust in 1959.