A Woman Paying Homage to a King 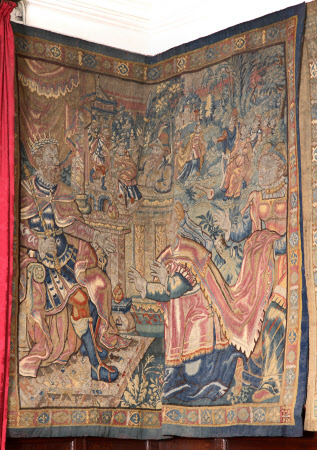 Tapestry, wool and silk, 5 warps per cm, A Woman Paying Homage to a King from a set of six Old Testament Subjects, Oudenaarde, c. 1575-1595. A small square tapestry with an enthroned king on the left wearing a crown and a laurel wreath on his head and holding a sceptre. A woman approaches from the right and kneels before him extending both her arms, and a maid follows her carrying the train of her dress. In the background there are two small scenes, one scene of a woman approaching a building and being met by a king carrying a sceptre, the other of a woman in a landscape holding a harp with a flute and a lute on the ground in front of her. The tapestry has a narrow border with a pattern of alternating fleurs-de-lys and flowers in lozenges, and a wide dark blue galloon.

At Hardwick Hall by 1601; thence by descent to Andrew, 11th Duke of Devonshire; acquired through the National Land Fund in 1956 and transferred to the National Trust in 1959.