The Homecoming of Ulysses 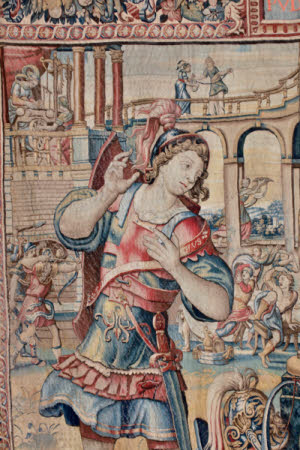 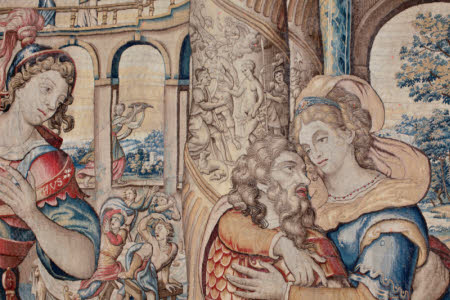 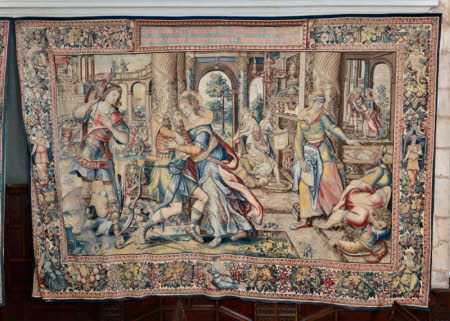 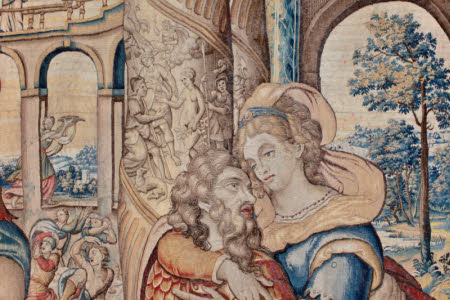 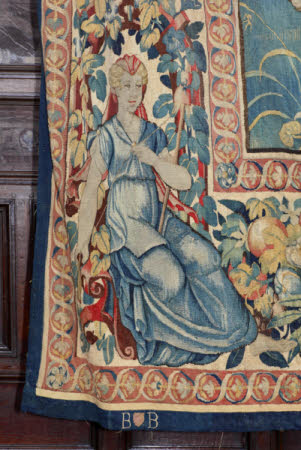 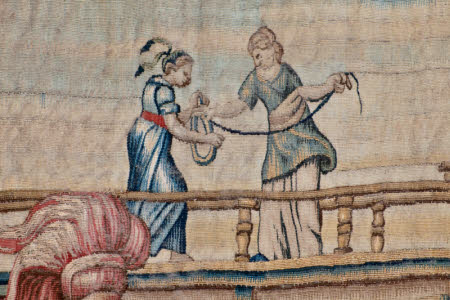 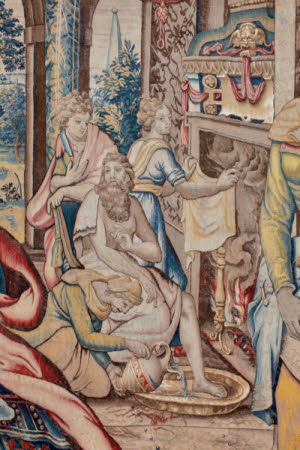 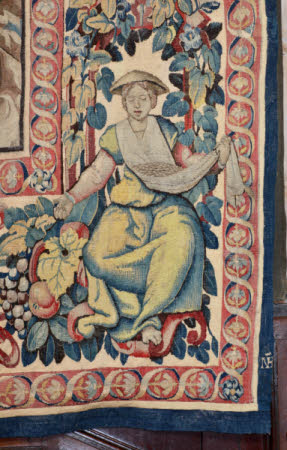 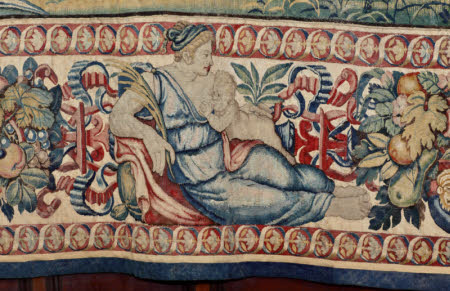 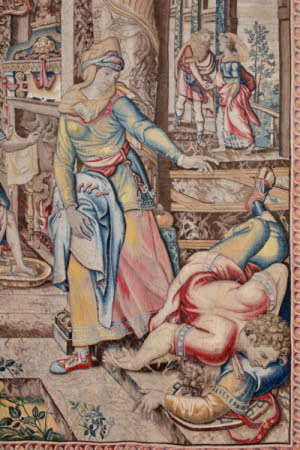 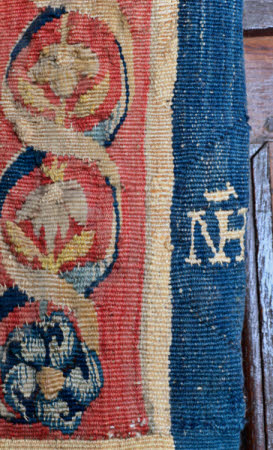 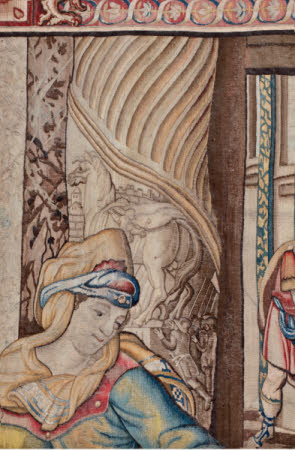 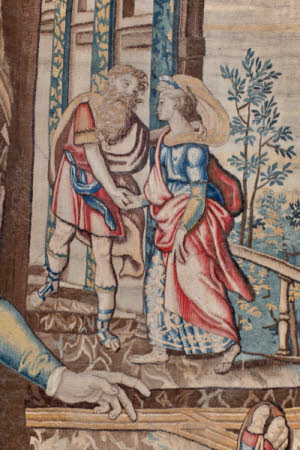 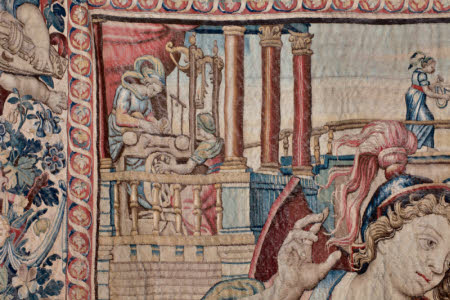 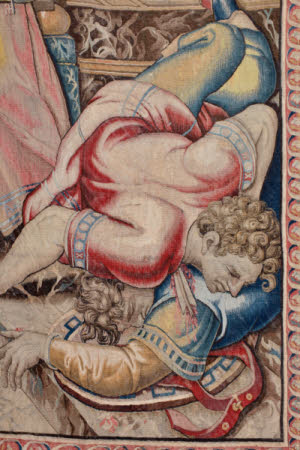 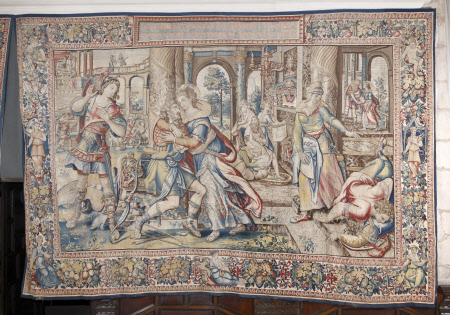 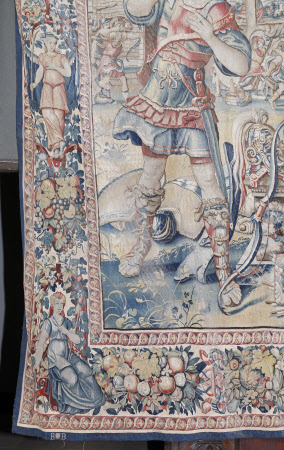 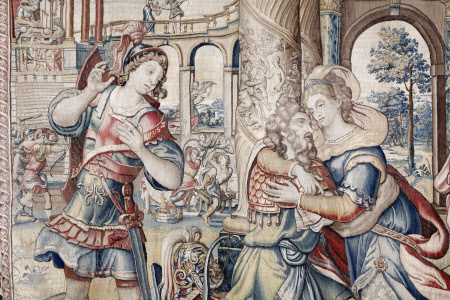 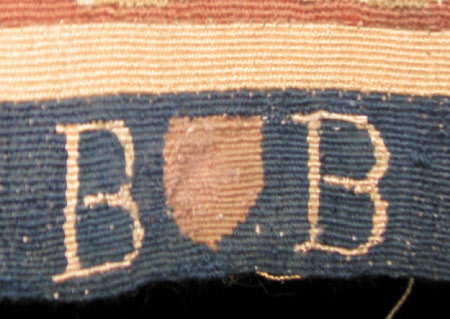 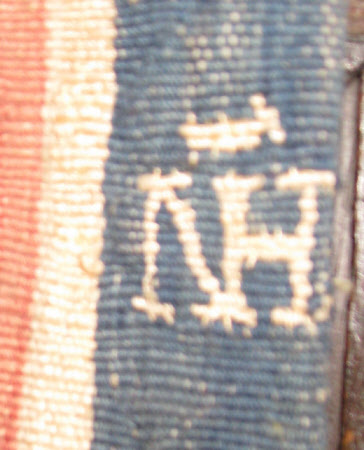 Tapestry, wool and silk, 7 warps per cm, The Homecoming of Ulysses, from a set of 8 of the Story of Ulysses, Brussels, c. 1550-1565. This is the last tapestry in the set, and is filled with narrative detail. In the centre Ulysses and Penelope are reunited, and embrace; Penelope’s name is sewn into the hem of her dress (Odyssey, Book XXIII, lines 205-210). The young Telemachus strides into the scene from the left. At the lower right is a crumpled pile of bodies, the remains of the suitors who had been living off Ulysses’ riches while he was away. Ulysses and Telemachus had slaughtered them all with the help of two faithful servants, and in the background on the left Ulysses can be seen aiming a bow and arrow at two fleeing suitors (Odyssey, Book XXII). The standing woman pointing to the fallen suitors on the right may by Eurycleia, Ulysses’ nurse, who appears again in a fireside scene in the background, washing his feet. Ulysses had returned to Ithaca disguised as a beggar in order to test the loyalty of his household, but while she was washing his feet Eurycleia recognised the scar on his leg, given to him by the boar in the first tapestry in the sequence (Odyssey, Book XIX, lines 355-475). In the upper left corner Penelope appears at her loom. Penelope kept the suitors at bay in Ulysses’ absence by promising them that once she had finished weaving a shroud for Laertes (Ulysses’ aged father) she would choose one of them as her husband. Every day she would sit at her loom but each night she unravelled the work she had done, until she was found out, shortly before Ulysses returned (Odyssey, Book II, lines 95-110). In the final small scene on the far right hand side Ulysses and Penelope appear again, on the way to their bedchamber. The reliefs on the two columns show the event that indirectly started the Trojan War, the Judgement of Paris, and Ulysses’ finest hour, when the wooden horse was wheeled through the gates of Troy.