The Discovery of Achilles by Ulysses 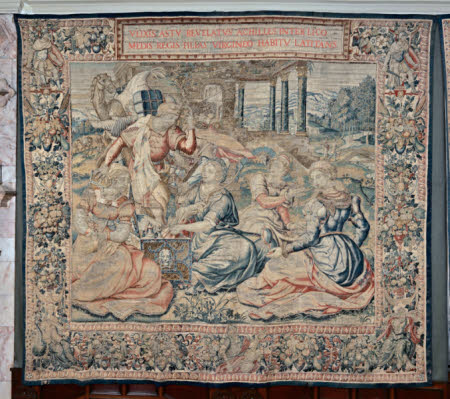 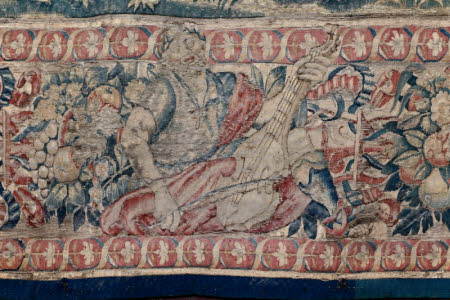 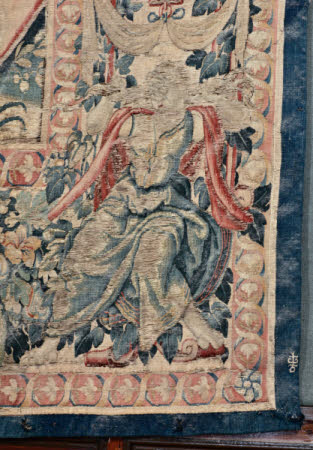 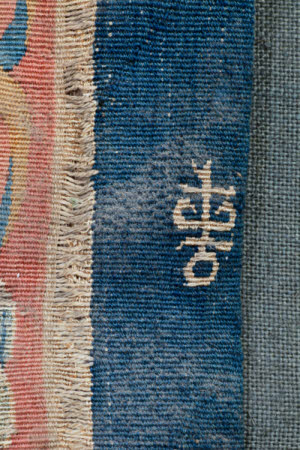 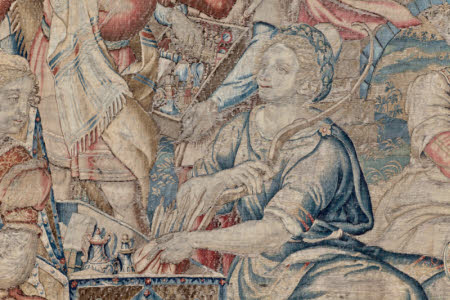 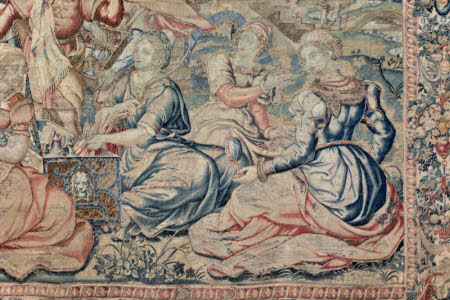 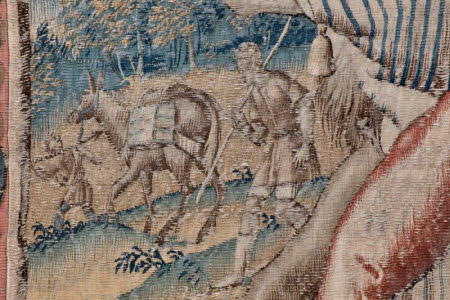 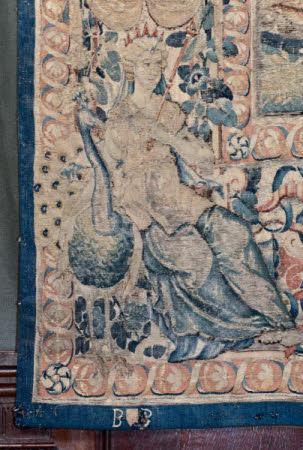 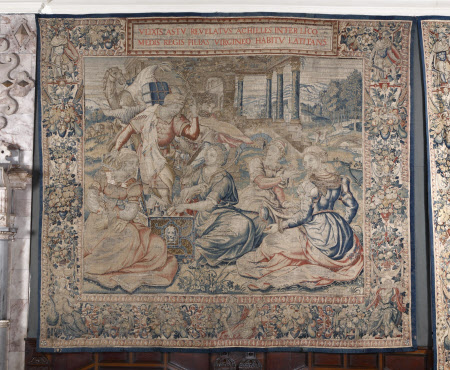 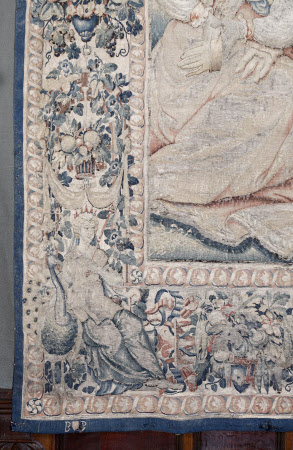 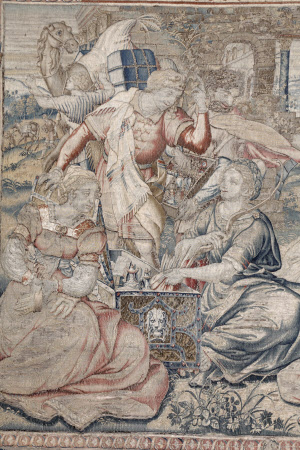 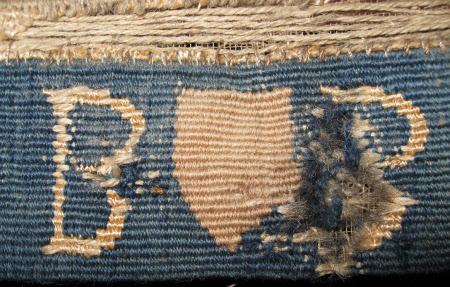 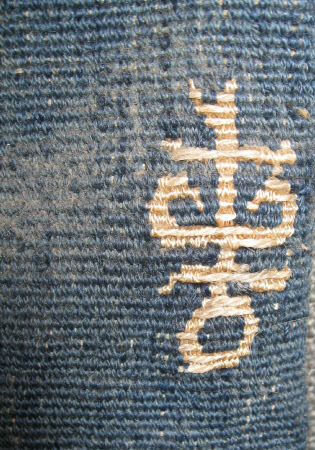 Tapestry, wool and silk, 7 warps per cm, The Discovery of Achilles by Ulysses, from a set of 8 of the Story of Ulysses, Brussels, c. 1550-1565. This is the fourth tapestry in the narrative series. Following a prophecy that Troy could not be taken without Achilles, Ulysses travelled to his island of Scyros to recruit him for the Greek army. As the result of another prophecy, that Achilles would either lead a long and uneventful life or achieve everlasting glory by dying young, his mother Thetis took him to the island of Skyros and hid him among the daughters of King Lycomedes disguised as a woman. After having discovered that Achilles was on Skyros, Ulysses cunningly discovered him by hiding armour and weapons of war in the chambers of the women. In the tapestry while the young ladies examine gloves, an ointment jar, and jewellery, Achilles, helpfully identified by an inscription on his dress, gives himself away by choosing a bow and arrows. The story is not told in the Iliad or the Odyssey but is referred to in Ovid’s Metamorphoses (Book XIII, lines 163-174) and other sources. In some accounts Ulysses arranges for a trumpet to sound which prompts Achilles to leap to his feet and grasp a sword.

The story of the Discovery of Achilles by Ulysses is not told in the Iliad or the Odyssey but is referred to in Ovid’s Metamorphoses (Book XIII, lines 163-174) and other sources. In some accounts Ulysses arranges for a trumpet to sound which prompts Achilles to leap to his feet and grasp a sword. The eight tapestries at Hardwick tell the story of the classical hero Ulysses (Odysseus in Greek mythology), King of Ithaca. Ulysses was one of the principal champions of the Greek forces during the Trojan Wars as recounted in the ‘Iliad’ of Homer, and he was the hero of Homer’s ‘Odyssey’ which charts his lengthy wanderings again after the war was over before finally returning to Ithaca. Renowned for his resourcefulness and his stratagems, Ulysses was responsible for the famous wooden horse which allowed the Greeks to enter the city of Troy. After the war when the various armies returned home Ulysses and his men were subject to a number of trials and adventures. Eventually Ulysses lost his entire crew, and returned home to Ithaca only after twenty years of wandering. Meanwhile his palace had been beset by suitors for the hand of his beautiful wife Penelope, who feasted continually at the absent king’s expense; on his return Ulysses punished the suitors brutally. The designer of the Ulysses series is unknown but they have been associated on stylistic grounds with Michiel Coxcie (1499-1592) (Roethlisberger 1972), and this is also supported by documentary evidence (Roethlisberger 1972; Delmacel 1993). All eight tapestries bear the mark of the city of Brussels, two Bs either side of a red shield for Brussels and Brabant, in the lower right hand corner. In addition seven of the tapestries also bear one of three different maker’s marks in the lower right corner, and one has signs of a now destroyed mark. The first mark, containing the initials PVA, has most recently been attributed to Pieter van Aelst the younger (fl. 1509-1555) (Delmarcel 1992, p. 440; Delmarcel 1999, p. 363). The second mark, in the form of the letters ‘NH’ with a horizontal line above them, is almost certainly that of Niclaes Hellinck, who is recorded in 1559 and again in 1576 (Delmarcel 1980, p.9; Donnet 1894, p.452; Destrée 1900, pp. 32-33). The third mark, consisting of a vertical line, forked at the top, with three curved horizontal lines crossing it and a circle at the bottom, belongs to an unknown weaver. A similar mark appears on a document dated 1562 accompanied by the signature ‘Niclaes’ (Steppe 1981). The Ulysses tapestries probably date from the 1550s or 1560s. The eight tapestries at Hardwick are the earliest and most complete surviving weaving of a set that was extremely popular during the sixteenth and seventeenth centuries, and numerous different weavings survive. These include a total of fifteen different episodes from the story. The most complete sets are in Schloss Herrnstein, North Rhine-Westphalia, and the Spanish Royal Collection (Junquera de Vega & Gallegos 1986, series 42). The tapestries have been at Hardwick since at least 1601, when they were recorded in an inventory of the house in their present position in the High Great Chamber. There is no record of their purchase, but Santina Levey has suggested that they were the set of hangings mentioned in the legal dispute between Bess and her fourth husband the Earl of Shrewsbury in 1586. One of the items that Shrewsbury claimed ownership of was “Item rich hangings 8 pieces which were Sir William Pickerings and bought by Mr Bateman which cost the Earl £200.” (Levey 1998, pp. 15, 23). Sir William Pickering (1516/17-1575) was English Ambassador to France from 1551-53, and an active patron and collector, with a particular interest in literature. Accused of plotting against Queen Mary’s Spanish marriage in 1553 he narrowly escaped arrest in Paris and spent the following year travelling in Italy and Germany. In December 1554 he was pardoned and in March 1555, a plausible date for the production of the tapestries, he was in Brussels; soon afterwards he was allowed home. Had Pickering wished to purchase or commission a set of tapestries in Brussels the story of Ulysses would certainly have been appropriate, as he was on his way home from an Odyssey in which he had narrowly escaped death. (Helen Wyld, 2009)