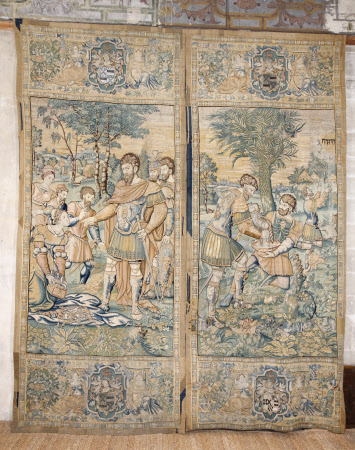 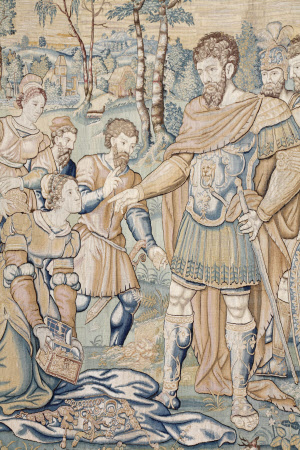 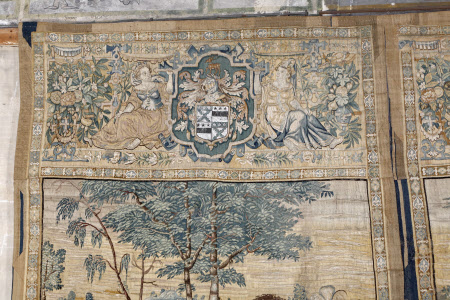 Tapestry, wool and silk, 5-6 warps per cm, The People Bringing looted Gold to Gideon, from a set of 13 of the Story of Gideon, Oudenaarde, 1578. This is the last tapestry in the narrative series. Following Gideon’s victory over the Midianites, and his capture and execution of their kings, he asked all the people of Israel to bring to him the golden earrings that they had collected from their prisoners, and all the other gold ornaments and fine raiments they wore. The people gladly agreed, and “they spread a garment, and did cast therein every man the earrings of his prey” (Judges 8.24-26). Gideon made an ephod of all the gold, and it is related that this ephod eventually “became a snare unto Gideon” because all Israel “went whoring after it” (Judges 8.27). In the tapestry Gideon stands over the garment spread on the ground which is covered with golden trinkets, and people approach bringing more treasures; two soldiers stand behind him on the right. This tapestry was woven without side borders.

The thirteen tapestries at Hardwick tell the Story of Gideon, one of the seven Judges to appear in the Old Testament Book of Judges. The Israelites had fallen out of the way of God into the worship of false idols, and as punishment God allowed them to be attacked by the Midianites and the Amakelites. God called on Gideon, son of Joash, to deliver the people of Israel from the Midianites and to restore them to His worship. After asking God to give him a number of signs, most famously involving a leaving a fleece out in the dew, Gideon set about choosing his army from the people of Israel, who flocked to him; he submitted them to a number of tests to reduce their number to 300. Gideon and his army finally attacked the Midianite camp and routed them, chasing the survivors into the hills. Once the Midianites had been definitively defeated the people of Israel asked Gideon to be their King but he refused, saying that only God could rule over them. Gideon lived the rest of his days in peace and had 70 children; after his death though the Israelites fell once more into false worship. The design of the Gideon tapestries is based in part at least upon a set of thirteen tapestries bought on behalf of Cosimo I de’Medici in Brussels in 1561 (Meoni 2003, p. 39). Three tapestries from the Medici series survive, two of which correspond to examples at Hardwick (Gaeto Bartelà 1980, cat. no. 111; Bisogni (ed.) 1990, pp. 283, 285). One of the ‘Gideon’ tapestries is woven with the date 1578. The series has long been thought to be woven at Oudenaarde, based on their quality and the design of the borders (van Ysselsteyn 1968; de Meûter 1998). This has recently been confirmed by the presence of a mark on the upper galloon of two of the tapestries in the form of a six-pointed star. Similar marks appear on three other known tapestry sets, one of which, a set of five ‘Large Leaf Verdures with the Labours of Hercules’ split between the Musée du Louvre, Paris and the Provinciall Paleis van Oost, Ghent, also bears the mark of the city of Oudenaarde (Delmarcel 1999, pp. 203-7; de Meûter et al. 1999, pp. 127, 131). The tapestries were woven for Sir Christopher Hatton, whose arms and itinials are woven into the borders. They were almost certainly intended for the Long Gallery at Holdenby Hall which was already under construction in 1578, the date woven into the tapestries. When Hatton died in 1591 his estates were inherited by his nephew Sir William Newport, who changed his name to Hatton on inheriting. Sir William sold most of the contents of Holdenby to pay off his uncle's debts, including the Gideon tapestries which were bought by Elizabeth, Countess of Shrewsbury ("Bess of Hardwick") in London in 1592. Bess had patches with her own coat of arms stuck over Hatton's, and his crest of a golden hind was converted into a Cavendish stag by painting it brown and adding antlers. The design, manufacture and history of the Gideon set are discussed in detail in Wyld 2012. (Helen Wyld, 2009)

Woven in Oudenaarde c. 1578 for Sir Christopher Hatton, and presumably hung at Holdenby Hall; on Hatton’s death in 1591 inherited by his nephew Sir William Newport (Later Hatton); July 1592 purchased by Elizabeth, Countess of Shrewsbury for Hardwick Hall; thence by descent to Andrew, 11th Duke of Devonshire; acquired through the National Land Fund in 1956 and transferred to the National Trust in 1959.