The Meeting of Abraham and Melchisedek 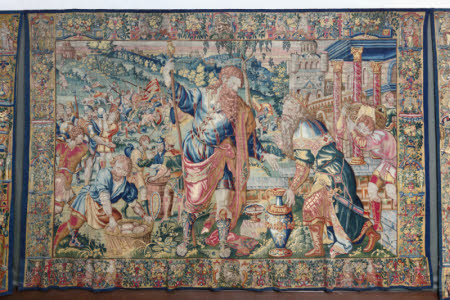 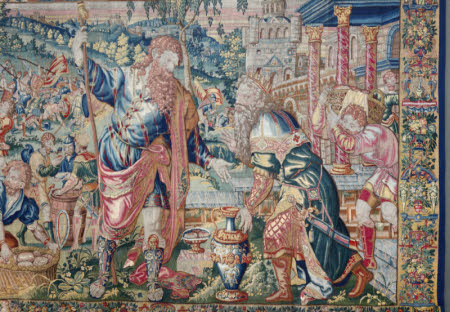 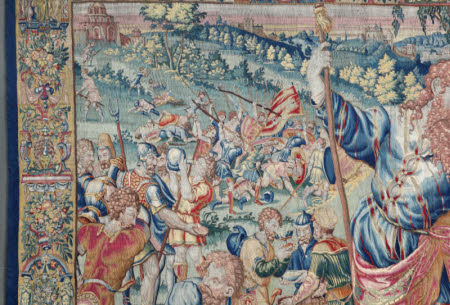 Tapestry, wool and silk, 6-7 warps per cm, The Meeting of Abraham and Melchisedek from a set of four of the Story of Abraham, probably Oudenaarde, c. 1580-1590. In the centre Abraham, wearing a blue and red striped tunic, stands holding a staff and gesturing with his left hand to King Melchisedek, who approaches from the right wearing a blue robe and a crown, offering Abraham a rich blue and gold vase full of wine. On the left a servant sets down a large basket of bread, and on the far left a man approaches carrying another basket. behind the main figures Abraham's soldiers eat bread and drink from flasks. In the right background is the ornate palace of Melchisedek with red marble columns, a crenellated wall and a tower. In the landscape in the left background is a battle scene representing Abraham's defeat of the Elamite army. The troops carry a red standard adorned with a golden star, two crescent moons and a coiled snake. The borders of the tapestry are composed of decorative architectural forms amongst foliage and fruit, with allegorical figures at the corners. The lower border has been woven separately from the rest of the tapestry.