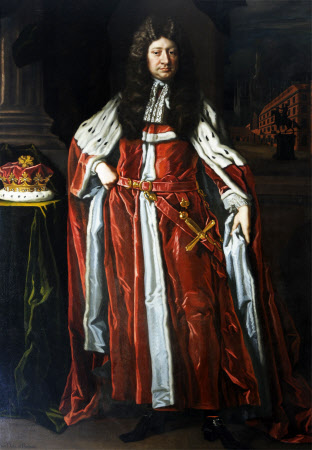 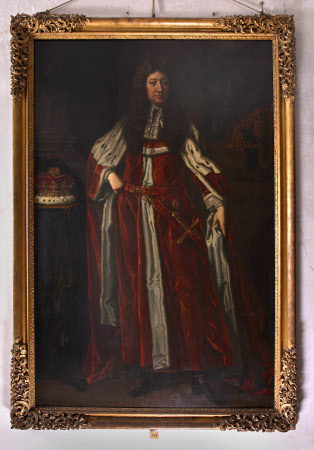 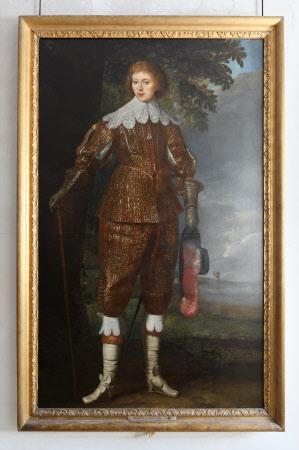 The sitter was created Marquess of Granby and Duke of Rutland in 1703. He was a supporter of William of Orange, assisting in raising forces for him in Nottinghamshire. It is possible that the mysterious, nocturnal urban scene in the background alludes to the escape of Princess Anne from Whitehall in the Glorious Revolution, following which she took refuge at Belvoir Castle.

Oil painting on canvas, John Manners, 1st Duke of Rutland (1638 – 1711) by John Baptist Closterman (fl.1690-1713), signed lower left: J. Baptist. Closterman / 'Pinxet and inscribed lower left, in black: First Duke of Rutland. A full-length portrait, standing slightly left, wearing coronation robes, his right hand on his hip, a table beside him (left) on which is his coronet; a window, right, with a view of a street and equestrian statue, dramatically lit at night, or as if by firelight. Four storey brick house on a square with a triple-arched entry and a bizarre cathedral (?) beyond - ?Treasury Building & Westminster Abbey? (possibly a reference to Princess Anne's flight from Whitehall, following which Manners gave her refuge?).

Seen by Horace Walpole at Chatsworth in 1760;in Agar-Ellis 1817 catalogue of Hardwick Hall; thence by inheritance until, following the death of Edward William Spencer Cavendish, 10th Duke of Devonshire (1895 - 1950), Hardwick Hall and its contents were accepted by HM Treasury in part payment of death duties and transferred to the National Trust, in 1959