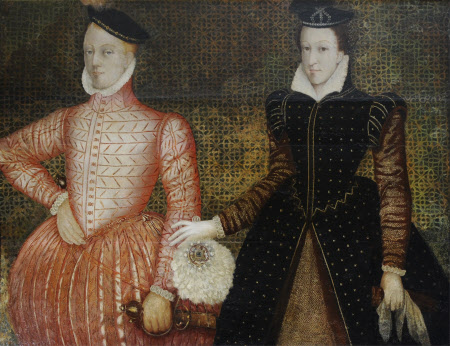 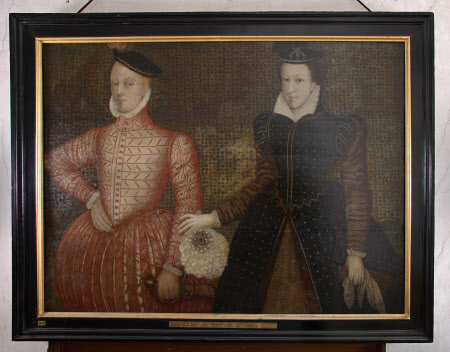 Oil painting on panel, Henry Stuart, Lord Darnley, (1545–1567) and Mary, Queen of Scots (1542–1587), British (Scottish) School, circa 1565. Two three-quarter length portraits, both turned slightly to the left, gazing at spectator; Darnley on the left, his right hand on his hip, his left holding the hilt of his sword, wears a pink dress embroidered with gold, small white frills at neck and cuffs, and black cap. Mary wears a jewelled surcoat over an embroidered dress, white collar and bonnet a l'Italien; in her right hand she holds a feather fan and in her left gloves and a handkerchief.

In Inventory of the contents of Hardwick Hall made in 1601 and attached to the will of Elizabeth Hardwick, Countess of Shrewsbury (c.1520-1608); omitted from the 1792 and 1811 inventories, evidently because one of the 28 (20) “very old pictures much defaced” that could not be made out, in the Gallery, given by the 6th Duke to “Mr Cribb, the picture cleaner” from whom bought back by the 7th Duke (according to Hawkesbury);in Lady Louisa Cavendish 1860 catalogue of Hardwick Hall and thence by descent until, following the death of Edward William Spencer Cavendish, 10th Duke of Devonshire (1895 - 1950), Hardwick Hall and its contents were accepted by HM Treasury in part payment of death duties and transferred to the National Trust, in 1959