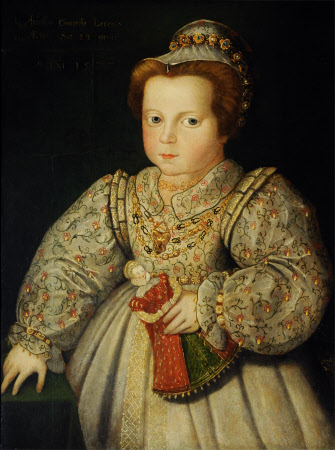 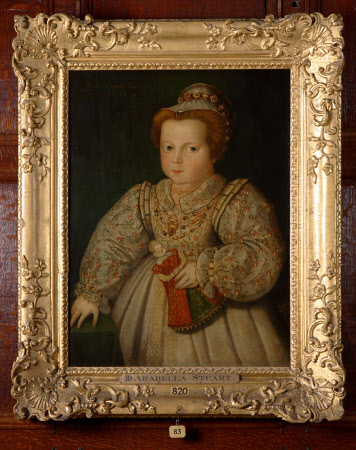 Oil on panel transferred to canvas

The sitter was the daughter of Charles Stuart, Earl of Lennox (1555-1576) and Elizabeth Cavendish (1554-1582). She was born at Chatsworth, but was orphaned when only six years old. Her engagement to William Seymour (1587-1660) was considered by James I to be a threat to the throne, and she was confined to the Tower. Having agreed to end the engagement, she was released, but she resolved to marry him in secret, resulting in their re-imprisonment. Her attempts to flee were foiled, and she died, having had a mental breakdown, in 1615. The doll she holds must have been an expensive toy, and bears more than a passing resemblance to Elizabeth I.

Oil painting on panel transferred to canvas, Lady Arabella Stuart, later Duchess of Somerset (1575 – 1615), aged 23 months, British (English) School, 1577. Inscribed top left: Arabella Cometissa Levenox./AEtate. Sue. 23.menses/Ao DNI 1577. A three-quarter length portrait, turned slightly to the left gazing at spectator, wearing a white embroidered dress, holding a very sophisticated doll wearing a highly detailed costume of the mid 1560s in her left hand and her right resting on a table. She wears a gold pendant containing the device of a crowned heart, a Stuart or Lennox device, surrounded by a scroll inscribed: POUR PARVENIR I (to arrive at my ends I stay the course). Her necklace includes another device of interlocking triangles. The device is similar to the pendant worn by Frances Howard, Duchess of Richmond & Lennox (also incorporating a St. Andrew's Cross) in William Passe's engraving of 1623. This latter may indeed be the jewel that was at Strawberry Hill, where Horace Walpole described it thus in 1784: 'a golden heart set with jewels, and ornamented with emblematic figures enamelled, and Scottish mottoes; made by order of the lady Margaret Douglas, mother of Henry Lord Darnley, in memory of her husband Matthew Stuart Earl of Lennox and Regent of Scotland, murdered by the papists' and also the jewel with a similar crowned heart, with arrows crossed behind it, worn by the sitter in a whole-length of around 1610-20 at Parham, impossibly called Elizabeth of Bohemia. The young woman also wears a miniature case embellished with diamond 'S's' - also suggesting that she is a Stuart (but not a royal princess).The sitter traditionally - and no doubt correctly - called Lady Arabella Stuart in the circle of Gheeraerts whole-length at Temple Newsam also has on her necklace ruby and gold pendants in the form of a heart over crossed arrows, hanging from diamond 'S's'. Mrs Jameson wrote in her Visits and Sketches at Home and Abroad with Tales and Miscellanies in 1834: "Who could look on this picture, and not glance forward through succeeding years, and see the pretty playful infant transformed into the impassioned woman, writing to her husband - 'In sickness, and in despair, wheresoever thou art, or howsoever I be, it sufficeth me always that thou art mine!' Arabella Stuart was not clever; but not Heloise, nor Corinne, nor Madlle.. De l'Espinasse ever penned such a dear little morsel of touching eloquence - so full of all a woman's tenderness!"

In Inventory of the contents of Hardwick Hall made in 1601 and attached to the will of Elizabeth Hardwick,Countess of Shrewsbury (c.1520-1608) as 'The Ladie Arbella her grandChilde' and thence by descent until, following the death of Edward William Spencer Cavendish, 10th Duke of Devonshire (1895 - 1950), Hardwick Hall and its contents were accepted by HM Treasury in part payment of death duties and transferred to the National Trust, in 1959