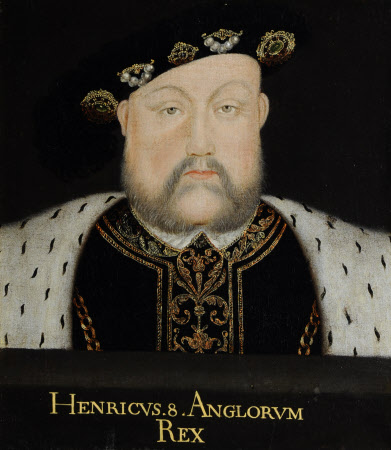 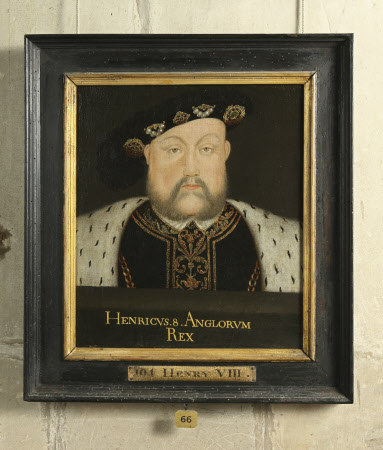 Henry Tudor was the son of Henry VII and Elizabeth of York, who famously married six times during his reign. He brought about some of the most comprehensive and controversial developments in the history of the British Isles, as England broke from Rome over divorce laws, and his dissolution the monasteries dismantled centuries of old infrastructure, in order to pay for his continental wars. The consequence of these actions was religious turmoil, left in the wake of Henry’s death, as the throne changed hands between his children, from Protestant Edward to Catholic Mary and then to the Protestant Elizabeth. The painting does not appear to be contemporary and therefore is unlikely to be one of the two portraits of the King included in the 1601 inventory. It is most probably a later copy.

Oil painting on canvas, King Henry VIII (1491–1547), British (English) School, mid 16th century. Inscribed in panel below: HENRICVS.8.ANGLORVM / REX. Not contemporary with the sitter but after the prime version of this pattern which is at Castle Howard in Yorkshire. A head-and-shoulders portrait, facing, wearing a black embroidered doublet, ermine cloak and black cap with jewelled ornaments.

Possibly the 'Henry VIII' mentioned [although does not look old enough] in Inventory of the contents of Hardwick Hall made in 1601 and attached to the will of Elizabeth Hardwick, Countess of Shrewsbury (c.1520-1608) and thence by descent until, following the death of Edward William Spencer Cavendish, 10th Duke of Devonshire (1895 - 1950), Hardwick Hall and its contents were accepted by HM Treasury in part payment of death duties and transferred to the National Trust, in 1959

in capitals in panel below HENRICUS.8.ANGLORUM REX