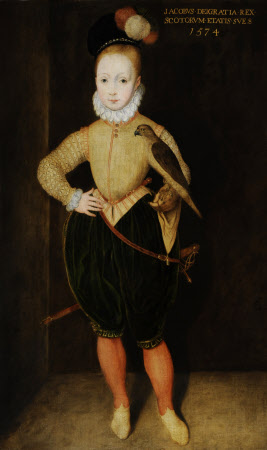 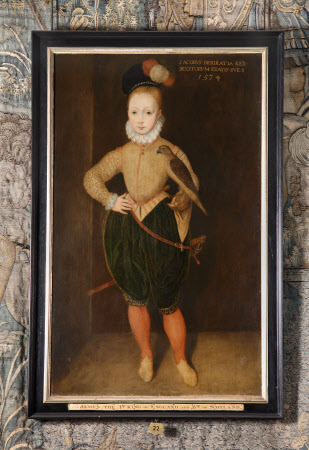 James I (IV of Scotland) was the son of Mary Queen of Scots and Henry, Lord Darnley. He acceded to the throne of Scotland on 24 July 1567 and was crowned in Stirling on 29 July 1567. He acceded to the English throne on 24 March 1603 and was later crowned in Westminster Abbey on 25 July 1603. He was married by proxy in 1589 to Anne of Denmark (1574-1619), second daughter of Frederick II, King of Denmark and Norway. This portrait was probably painted for Bess of Hardwick, for whom Lockey executed various works. It is unlikely to have been painted for her son, as after James’s accession to the English throne in 1603, there would have been little point, or need, to have a portrait of him as a boy. It was copied after the half-length (cut down from a full-length), by Arnold Brounckhorst, and painted around 1574, in the Scottish National Portrait Gallery.

Inventory of the contents of Hardwick Hall made in 1601 and attached to the will of Elizabeth Hardwick, Countess of Shrewsbury (c.1520-1608) and thence by descent until, following the death of Edward William Spencer Cavendish, 10th Duke of Devonshire (1895 - 1950), Hardwick Hall and its contents were accepted by HM Treasury in part payment of death duties and transferred to the National Trust, in 1959