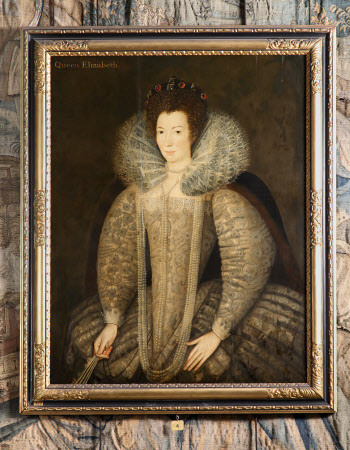 Mary Cavendish was the daughter of Sir William Cavendish (1505?-1557) and Elizabeth Hardwick (1543?-1544). In 1568 she married Gilbert Talbot, 7th Earl of Shrewsbury (1552-1616). Mrs Jameson wrote in 1834 that “She resembled her mother in features as in character. The expression is determined, intelligent, and rather cunning. Of her haughty and almost fierce temper, a curious instance is recorded.” She also records a quarrel with her neighbours, the Stanhopes, and not being able to defy them with sword and buckler, she sent one of her gentlemen with a message to be recounted: “ …. you be more wretched, vile, and miserable than any creature living, and for your wickedness become more ugly in shape than the vilest toad in the world; she [Mary] be contented you could live, and doth noways wish your death, but to this end: that all the plagues and miseries that may befall any man, may light on such a caitiff as you are” !

In Inventory of the contents of Hardwick Hall made in 1601 and attached to the will of Elizabeth Hardwick,Countess of Shrewsbury (c.1520-1608) and thence by descent until, following the death of Edward William Spencer Cavendish, 10th Duke of Devonshire (1895 - 1950), Hardwick Hall and its contents were accepted by HM Treasury in part payment of death duties and transferred to the National Trust, in 1959