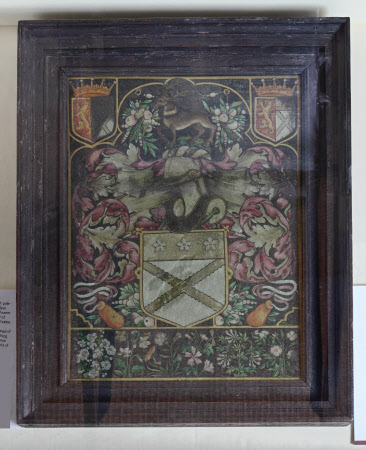 A verre eglomisé panel, English, possibly late 16th/early 17th century. Painted with the arms of SHREWSBURY impaling HARDWICK beneath an earl's coronet in each top corner, and with the central arms of HARDWICK beneath a visored helm and a stag upon a torse. All against a field of sprays of pansy, mallow, honeysuckle and eglantine and with red and green acanthus mantling and tassels. Backed by silver foil, and coloured in red, green, orange and gold. All in a moulded and ebonized oak cassetta frame, and with a chamfered backboard. A groove in front of the painted plate probably accommodated a wooden cover to protect the panel whenever it was moved. -- Possibly the 'glass with his [6th Earl of Shrewsbury] and my Ladies armes in it', listed in the 1601 inventory in the Low Great Chamber. Another 'glass with my Ladies armes' was listed in 'my lady's withdrawing chamber' (now the Little Withdrawing Room) in the same document.