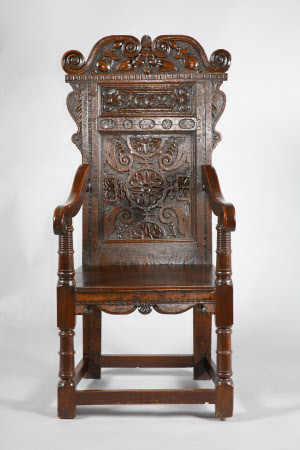 An oak double panel-back armchair, English, probably South-West Yorkshire/Derbyshire, dated 1662, probably once inlaid, the inlay now lacking. The cresting rail centred by a grotesque mask beneath a pair of bold 'S'-scrolls flanking a projecting leaf. The upper panel carved with the date 1662 between a pair of flowers and ears of scrolls against a matted ground. The rail above the back panel carved with alternating cartouches, the back panel carved with flowerheads and strapwork scrolls, and possibly the initials 'II'. The downswept arms with scroll-carved ends flanking a boarded seat above a front seat rail with scroll-carved apron centred by a pendant leaf. The arm supports and front legs ring-turned and knopped. With peripheral stretchers. -- Much of the 16th and 17th century oak at Hardwick Hall, the indigenous pieces aside, was probably purchased by the 6th Duke in the 19th century to enhance the Elizabethan feel of the property, much as his contemporary, Charles Winn of Nostell Priory, is known to have done (Westgarth, Raikes). The 6th Duke is recorded, for instance, as having bought 'oak Arm chairs' in 1846.