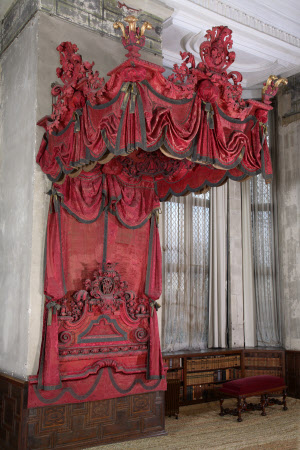 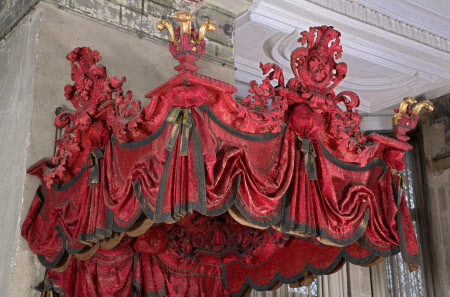 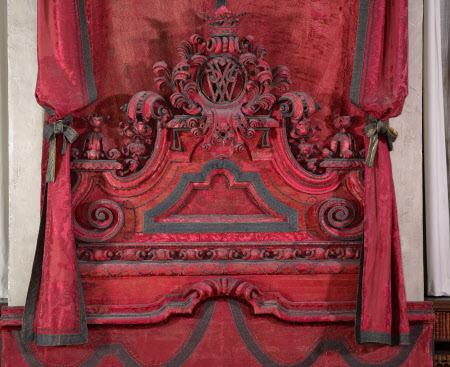 An important state bed canopy and headboard, English, circa 1697, attributed to Francis Lapiere [fl. 1683 - 1714], and described by Geoffrey Beard in 1997 as the 'one surviving documented and substantial example of Lapiere's work'. Originally made for William Cavendish, First Duke of Devonshire for Chatsworth, the 6th Duke (1790 - 1858) moved it to the Long Gallery in the 1820s to replace an earlier, smaller example. It appears in William Henry Hunt's 1828 view of the Long Gallery. A fragment only, what remains consists of a tester, carved cornices and a headboard, all covered in crimson silk damask and trimmed with gold thread lace galloon. The holes in the tester show that this was once a four-poster bed, not an 'angel' tester as has been claimed. The upholstery fixed to pine, the ceiling is coved and bossed. The backboard with scroll-carved pediment and a crowned festooned cypher, probably for William Cavendish. The cartouches to the canopy decorated with the Royal Garter motto. The bed's gilded feet now placed as corner finials on the tester cornice.

Made for the Fourth State Room at Chatsworth, circa 1697. Erected by the 6th Duke of Devonshire in the Long Gallery at Hardwick Hall before 1828. By descent until, following the death of Edward William Spencer Cavendish, 10th Duke of Devonshire (1895 - 1950), Hardwick Hall and its contents were accepted by HM Treasury in part payment of death duties and transferred to the National Trust, in 1959.