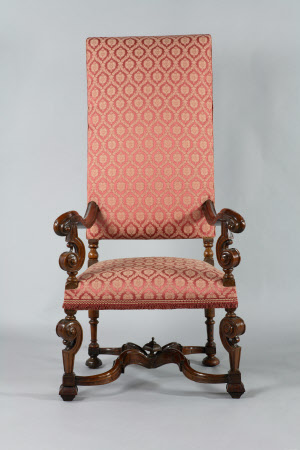 An open armchair, one of a set of eight carved walnut and upholstered open armchairs, English, circa 1700, in the manner of Thomas Roberts (fl. 1686 – 1714). Each having a rectangular back and padded seat upholstered in later pink damask, the arms raised on moulded and scrolling supports, the front legs an inverse moulded scroll on tapering square-section feet, united by an undulating 'X'-shaped stretcher centred by a spire finial.

Transferred to the National Trust from the Treasury in 1984.