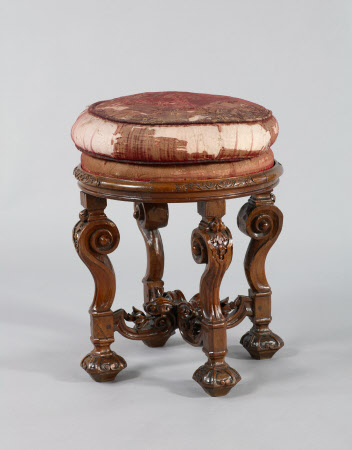 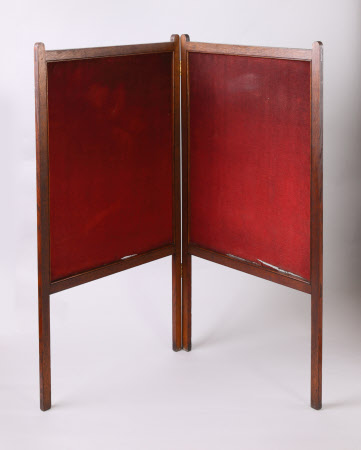 One circular stool, from a rare set of twelve carved walnut stools, English, circa 1702, attributed to Thomas Roberts (fl. 1686 - 1714), comprising one other circular stool [NT 1127752.1], six long stools, or 'bankettes' as they were known [NT 1127752.3 - 8] and four smaller rectangular stools [NT 1127752.9 - 12]. This circular stool with loose red velvet-upholstered cushion with traces of gold thread embroidery, the seat pad upholstered in red velvet, the moulded seat rails with alternating lengths of plain moulding and reserves of foliated scrolls, raised on four rectangular-section scrolling supports with sunken reserves carved with harebells, each leg with a lower collar attaching the 'X'-shaped scrolling and acanthus-carved stretcher, the feet of tapering square-section and carved with scrolls. Thomas Roberts (fl. 1685 - 1714) was a 'joiner' who supplied royal palaces with furniture between 1685 and 1714. In 1697, he made an elaborate firescreen for Windsor Castle. Roberts was also employed at Chatsworth and paid in 1702 for 'walnut armchairs, two large saffaws and six bankettes', an order to which these stools could relate. These stools attributed to Roberts on the basis of the foliated scrolls carved to the corners and centre of each seat rail, an unusual feature found also on documented pieces of furniture known to be his work. See, for instance, NT 1127754 & 1127755, also attributed to Roberts, for a pair of chairs and five matching stools with the same enriched mouldings. This attribution is strengthened by the survival of a very similar set of documented stools at Hampton Court Palace.