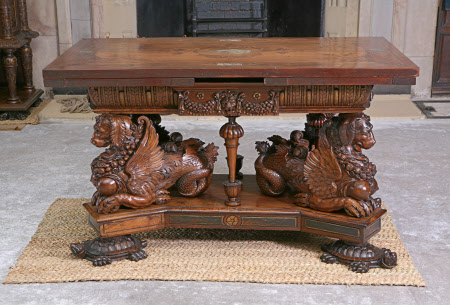 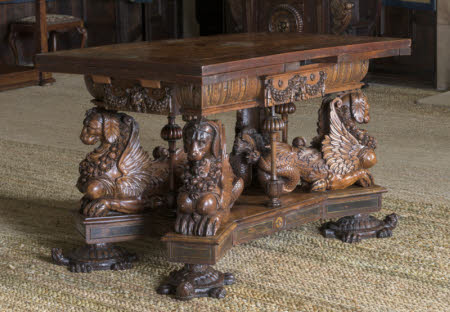 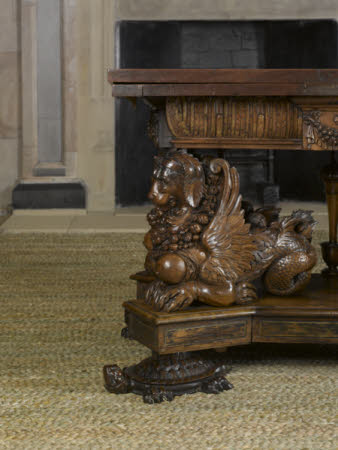 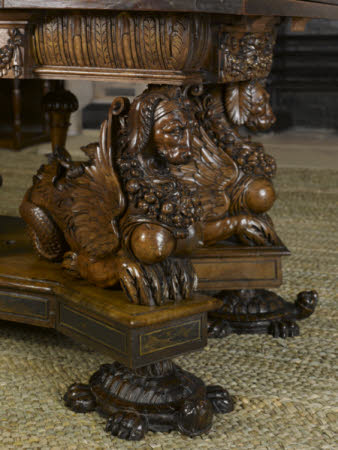 Elaborate, fantastical and exquisitely carved, this eye-catching table is one of the best surviving examples of Elizabethan furniture in the National Trust collections. It was commissioned from one of Europe’s top craftspeople working in Paris. The highly unusual design features four carved ‘sea dogs’ – fantasy creatures with a dog’s head, scaly breasts, wings and dolphin tails. It was purchased for display at Chatsworth House in Derbyshire, the home of George Talbot (c.1522–90), 6th Earl of Shrewsbury, and his wife Elizabeth (known as Bess of Hardwick) in the 1570s. The quality of the piece, the striking design of the sea dogs and the Italian marble inlay would have made it a talking point for the couple’s visitors. The earl had responsibility for Mary Queen of Scots, who was under house arrest in his home, so this table would almost certainly have been known and admired by her. After the marriage ended c.1584, Bess took the coveted table and it later furnished her new home, Hardwick Hall in Derbyshire, where it remains.

A marble-inlaid walnut 'drawing table', or draw-leaf table, France, probably Paris, circa 1570. The rectangular top sits upon a pair of leaves designed to be drawn out at either end but which fit beneath it when the table is not extended. All three pieces of the top inlaid with different marbles; verde antico at the ends, cipollino mandolato to the long edges and fior di pesco to the leaves. The central irregularly-shaped marble inlay to the main board - probably breccia di Seravezza - has probably been modified. Also inlaid in various woods with flowers and fruits and arabesque marquetry. Beneath the top, a stop-fluted and stiff leaf-carved frieze is centred by a tablet carved with floral festoons and a lion mask. The base is formed from four recumbent mythical beasts resembling chimera but with hound-like heads, which were later described as the 'sea-dogs' from which the table's popular name derives. Evidence suggests that these dogs, and possibly other parts of the table, were originally gilt. The top supported by gadrooned and turned balusters (possibly modified) and a plinth upon which the sea-dogs rest, with panels of black and gold paint scumbled to simulate marble within gilt borders. The feet, which are probably replacements, take the form of sea turtles. A central support is possibly missing.

Almost certainly made in Paris, by an unidentified craftsman, the design of this richly-ornamented, gilded and carved draw–leaf table is highly reminiscent of an engraving of c.1565-70 by the French Court architect Jacques Androuet du Cerceau (1510-1584), which illustrates three differing designs for seadogs – imaginary and fantastical creatures combining dogs’ heads with garlanded necks, breasted winged bodies and dolphins’ tails. Du Cerceau’s other published pattern books of furniture ornament also inspired details for the lion mask, fruit swags and rosettes on the carved frieze. Possibly used during the banqueting course at the end of a meal - it can be dismantled into seventeen pieces and easily moved - the top is inlaid with various woods in arabesque patterns and panels of Italian marble, despite the fact that it was originally covered with a valuable textile: the 1601 inventory in which the table is first recorded describes it as 'a drawing table Carved and guilt standing upon, sea doges inlayde with marble stones and wood, a Carpet for it of nedleworke of the story of David and Saule with a gold fringe and trimmed with blewe taffetie sarcenet.' This textile would have been removed when the table was in use. One of the most significant pieces of 16th century furniture to survive in England, it is the only piece of furniture currently at Hardwick which can unequivocally identified in the inventory of 1601. It is thought to have been originally acquired for 'Old' Chatsworth, the house built by Elizabeth, Lady Cavendish [‘Bess of Hardwick’] from 1549 onwards with her second husband Sir William Cavendish (1508-1557), later enlarged and enriched during her two subsequent marriages including to George Talbot, 6th Earl of Shrewsbury in 1567. Shrewsbury may have acquired the table through Mary, Queen of Scots whose incarceration, on the command of Elizabeth I, was his responsibility from 1568 – 1584. Mary is known to have sent one of her valets de chambre, Ange Marie, to France to secure furniture late in 1570, and in 1577 corresponded about procuring beds and candlesticks from Paris for Shrewsbury. Equally, however, Elizabeth, Countess of Shrewsbury could have acquired French gilded furniture on her own account. Following the breakdown of the Shrewsbury’s marriage it is assumed that the table was removed from Chatsworth and taken to Bess’ new house, Hardwick Hall, built between 1590 and 1599. The symbolism of the sea dog design would have been apparent to an Elizabethan audience – the term being applied most famously to Sir Walter Raleigh, Sir Francis Drake and Sir John Hawkins who, with the permission and connivance of Elizabeth I, were engaged in attacking and looting Spanish ships, as well as slave trading. A contemporary engraving of 1576 depicts Queen Elizabeth I seated on a throne supported by seadogs, the use of this imagery suggesting both the monarch’s reliance upon such men and through them her dominion over the sea.

Recorded in the 1601 inventory of Hardwick Hall in the 'with drawing Chamber'. By descent until, following the death of Edward William Spencer Cavendish, 10th Duke of Devonshire (1895 - 1950), Hardwick Hall and its contents were accepted by HM Treasury in part payment of death duties and transferred to the National Trust, in 1959.