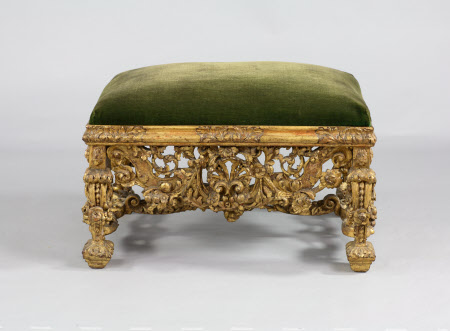 One stool from a rare suite of five pieces of William III carved giltwood and velvet-covered seat furniture, circa 1700, possibly by Thomas Roberts [fl. 1685 - 1714], comprising four foot stools and a single long, or 'double', stool [1127736. 1 - 4 & 1127736. 5]. Each stool topped by a drop-in seat pad, later upholstered in faded green velvet and set into moulded seat rails, carved to the centre and to each corner with a spray of foliate scrolls, and raised on four tapering rectangular-section scrolling legs decorated with beading and with acanthus leaves capping the central scroll, terminating in tapering square feet. An elaborate apron to the front and both short ends, carved and pierced with foliate scrolls, flowers and leaves, the front apron centred on a shell, and with an arched and scroll-carved central stretcher. Thomas Roberts (fl. 1685 - 1714) was a 'joiner' who supplied royal palaces with furniture between 1685 and 1714. In 1697, he made an elaborate firescreen for Windsor Castle. Roberts was also employed at Chatsworth and paid in 1702 for 'walnut armchairs, two large saffaws and six bankettes', an order to which other seat furniture at Hardwick probably relates. This set of seat furniture is attributed to Roberts on the basis of the foliated scrolls carved to the corners and centre of each seat rail, an unusual feature found also on documented pieces of furniture known to be his work.

Originally, in the Fourth State Bedroom at Chatsworth and brought to Hardwick by the 6th Duke of Devonshire, William Spencer Compton Cavendish (1790 - 1858) circa 1820, along with the silk canopy of the Chatsworth State Bed, made by Francis Lapierre in 1697, which serves as a canopy in the Long Gallery. This suite of stools are shown, nearby the canopy, in an 1828 watercolour of the Long Gallery by William Henry Hunt (1790 - 1864). Thereafter by descent, until a Treasury Transfer of textiles and furniture in 1984. This suite of stools are now displayed in The Green Velvet Room, alongside an early 18th century green velvet-upholstered bed, brought by the 6th Duke from Londesborough, another Cavendish property brought into the family through marriage with the daughter of the 3rd Earl of Burlington.