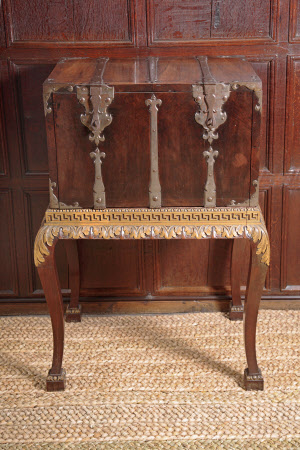 A parcel-gilt mahogany stand, English, circa 1725, the stand for a walnut-veneered and brass-mounted strong box, circa 1675 [NT 1127724.1]. The stand of mahogany and with open top, with parcel-gilt Greek Key frieze, flared acanthus apron and acanthus to the knees of the square-section cabriole legs, terminating in square feet. One of three strong boxes at Hardwick Hall, the box veneered in walnut, with fall-front and hinged cover enclosing an interior of a well, drawers and secret compartments, mounted to the exterior with elaborate brass straps and lockplates, and with corner mounts.

Two strong boxes of this type at Hardwick Hall were provided with matching stands around 1725, and are presumed to be associated with commissions for cabinet furniture from William Kent for Chiswick House by William Cavendish (1672 - 1729), 2nd Duke of Devonshire. This box and stand bears a paper label reading 'Duke's Dressing Room'. By descent until, following the death of Edward William Spencer Cavendish, 10th Duke of Devonshire (1895 - 1950), Hardwick Hall and its contents were accepted by HM Treasury in part payment of death duties and transferred to the National Trust, in 1959.