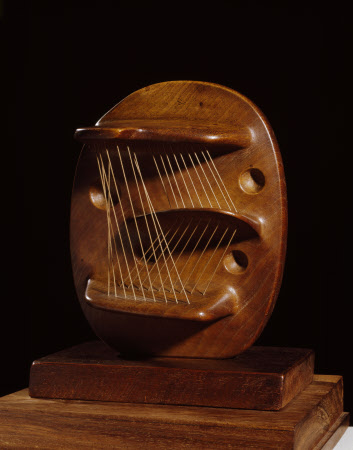 Henry Moore made his first stringed sculptures in 1937, inspired by models in the Science Museum illustrating mathematical propositions, which had first made an impression upon the artist when he was still a student at the Royal College of Art. Moore wrote in later years that ‘It wasn’t the scientific study of these models but the ability to look through the strings as with a bird cage and to see one form within another which excited me.’ He ‘did stringed figures only for two or three years, as I found, after a period, that the use of strings in sculpture was almost too ingenious, too easy.’ (Moore 1968, pp. 105-07) The sculpture ‘Head’ was one of three stringed sculptures Moore made in 1938 in elm wood, a material of which he was fond. Most of his subsequent stringed sculptures were however made for casting in metal. The sculpture may be seen in a drawing, Four Forms (Tate), also made in 1938. It is not clear whether the drawing represents the definitive model for Head or whether it was drawn from the completed sculpture. Head may be seen as a form of extension of the mask sculptures being made by Moore in the 1920s but, rather than the influences of primitive art seen in the earlier works, here Moore derives his concepts from surrealism, with resonances with contemporary works by artists such as Ben Nicolson and Naum Gabo. David Sylvester, whose writings were informed by many discussions with Henry Moore, wrote of the sculptor’s string sculptures: ‘The string, taut and weightless, presents a contrast with the curvilinearity and the density of the solid parts. It creates a transparent barrier between the space enclosed within the concaves of the sculpture and the space around the sculpture. Movement of the eye along the length of the strings sharpens awareness of the space the sculpture encloses, especially when one set of strings can be seen through another, so that a counterpoint of movement is created which quickens the vibration of the space.’ (Sylvester 1966, p. 105). It has been suggested that the sculpture Head possesses an unearthly, almost daemonic strangeness, the set of strings, passing at different levels and in different directions in front of the rather humanoid form serving to emphasise the depth of the sculpture, but also to introduce a series of strange and disconcerting relationships (Neumann 1959, p. 70). Jeremy Warren, 2018

Acquired for £25 by Ernö Goldfinger and Ursula Ruth Blackwell, Mrs Ernö Goldfinger from the Aid to Russia exhibition held at 2 Willow Road in 1942. Restrung by Henry Moore in 1967 Initially on loan from the Goldfinger family since 1994, formally purchased by the National Trust since then.