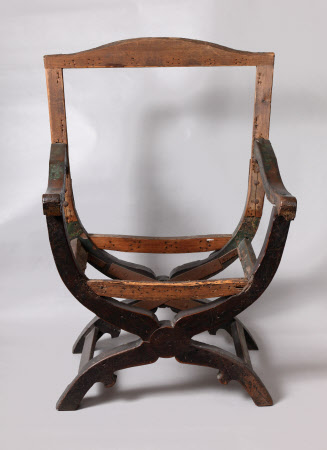 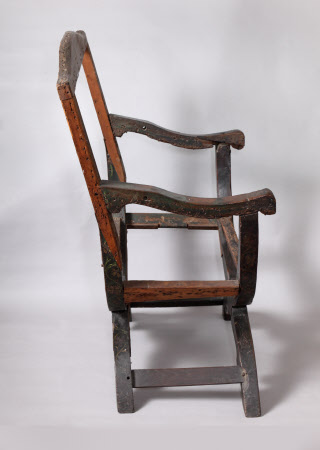 A beech 'X'-frame chair, English, circa 1585. Lacking upholstery, the cresting, rear uprights and front and rear seat rails replaced with later pine, the curving supports embellished with spandrels and united by side stretchers. With traces of paint to the parts of the frame intended to show, of flowers and foliate arabesques against a green ground. A rare chair of a type of which other examples - with original or near-contemporary upholstery - are at Knole, Kent [NT 129415, NT 129419, NT 129421, NT 129442 & NT 129463]. Several of which are stamped with the date 1661 and bear inventory marks for Hampton Court Palace. This example is lacking its upholstery, but nailing marks are evident throughout the frame. This chair would originally have been designed to fold (the replacement timbers mean that it no longer can). Compare a chair at Knole [NT 129419], which is also painted, with white arabesques on a red ground. This is the only surviving chair of this type at Hardwick; the inventory refers to many.