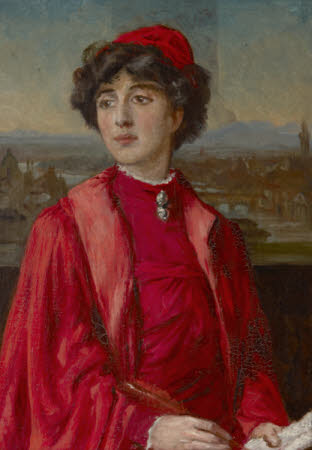 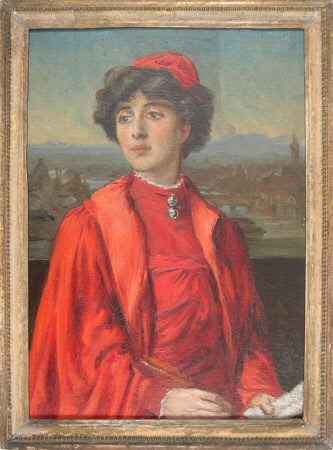 Vita Sackville-West is depicted wearing the scarlet red costume worn by Dame Ellen Terry for the role of Portia in Act IV of Shakespeare's ‘The Merchant of Venice’. She wore borrowed the costume to wear at a Fancy Dress Ball held at Knole in 1910 in aid of the Shakespeare Memorial Theatre Fund, where Ellen Terry also performed. Vita later wrote of the actress: 'She was all woman to me’. The artist, Clare 'Tony' Atwood, shared a home with Ellen Terry's daughter, the suffragist and theatre director Edith (Edy) Craig (who transferred Smallhythe Place to the National Trust in 1939) and with writer and translator Christopher St John (Christabel Marshall).

Oil painting on canvas, Vita Sackville-West (1892-1962) in Dame Ellen Terry's Costume for 'Portia' in William Shakespeare's The Merchant of Venice by Clare Atwood (Richmond, Surrey 1866 – Tenderden, Kent 1962), probably circa 1930. A three-quarter-length imaginary portrait, against a view of Florence [not Venice] in the red costume for the court scene (still at Ellen Terry's home Smallhythe: NT 118837) lent to Vita for the Fancy Dress Ball at Knole on 3rd July 1910. The ball was staged in the park of Knole house in aid of the Shakespeare Memorial Theatre Fund and Ellen Terry performed whilst Venetia Stanley, Elizabeth Asquith and Winston Churchill also attended along with Harold Nicolson, eighteen-year-old Vita's future husband. Ellen Terry (1847-1928) reprised the role of Portia several times; she first played her in 1875 at the Prince of Wales Royal Theatre, King's Cross and later with Henry Irving from 1879 - 1902 at the Lyceum theatre and finally at the Old Vic theatre in 1917. This costume is dated 1895, based on a drawing, lithograph and coloured photograph, also still at the property. Vita later wrote of Ellen Terry: 'She was all woman to me, all the rhymes/Hung by the young Orlando on the oak' (Centenary poem, 27 February 1947).

Acquired with Smallhythe Place by National Trust in 1939.

by Clare Atwood (inscribed on reverse)

Moments of Being: an exhibition based on the writings of Virginia Woolf, Tate St Ives, Cornwall, 2018