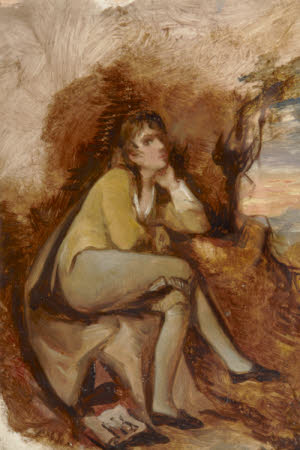 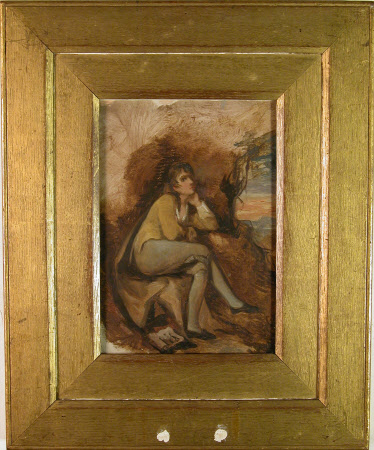 Oil painting on panel, Called Mrs Siddons as 'Rosalind' (after Master Thomas Haden as 'Edwin' from Dr Beattie's 'Minstrel' by Wright of Derby) by Joseph Wright of Derby, ARA, (Derby 1734 - Derby 1797), inscribed on reverse by Henry Irving stating that the picture was given to H. Irving by Miss C. Gretta Morritt of Rokeby, Barnard Castle on 8th July 1893, and given by him to Ellen Terry. (Pencil note 'Incorrect - related picture. This is a copy of Edwin (from Dr James Beattie's 'Minstrel, or the Progress of Genius', 1774), which was exhibited at the Royal Academy in 1778 and which now belongs to Lady Cynthia Colville'). (Further handwritten note attached to inventory card states 'The sketch by Joseph Wright of Derby. I have an engraving of this picture by Seymour Halan on which it is described as a portrait of Haydon's grandfather).

The subject of Edwin is taken from Book 1 of Dr. James Beattie's long poem, The Ministrel; or The Progress of Genius, written in 123 Spenserian stanzas. Book 1 was published in 1771 and Book II was added to it and published in a new edition (probably the edition that Wright used) in 1774 under Dr Beattie's name. The Minstrel was an important and comparatively early romantic response to the sublime aspects of nature. As a narrative of a young poet drawing his education and inspiration from nature, it foreshadows Wordsworth's Prelude by many decades. It had a profound influence on Wright and perhaps helped make him increasingly aware in the 1770s of landscape as a paintable presence. The whole poem, though unfinished, was received so enthusiastically that it went into numerous editions in the author's lifetime. Although not a household name or well-known text now, visitors to the Royal Academy of 1778 - Wright's first time exhibiting there - could be expected to have read or heard of The Minstrel. Edwin, 'the visionary boy' who is the 'son of a shepherd-swain of low degree', is sensitive and solitary and grows up free to roam and be responsive to all of nature's moods. He prefers above all to frequent 'the deep untrodden groves' and this is where Wright chooses to depict him in front of rocky outcrop musing in contemplative solitude and thought. Wright sees Edwin as a youthful image of melancholy, perhaps taking his cue from stanza XXII: Even sad vicissitude amused his soul: And if a sigh would sometimes intervene And down his cheek a tear of pity roll A sigh, a tear, so sweet he wished not to control... When his painting of Edwin was at an advanced stage, Wright sought advice from the author. On 18 January 1778 he wrote to Dr. Beattie describing the work, 'I have made him a beautiful youth of 16 or 17 years of age, sitting under a rock on ellevated ground which cuts upon a Mountainous Distance. He holds a small pipe in his right hand and reclines his Cheek upon his left, he looks Contemplative and penetrating - his dress is plain and simple, something of the old English dress with a loose cloak and his hair in wavy locks about his Shoulders..'. Concerned that the painting did not contain enough clues to Edwin's identity, Wright sought advice from the author on a few lines that he should engrave on the rock behind the boy. Dr Beattie replied and suggested the following lines that the artist duly added: 'exulting view'd in Nature's frame Goodness untainted, wisdom unconfined Grace grandeur and Utility combined'. As Nicolson points out the artist drew on two studies in his Roman sketchbook of 1774 for the pose of the young boy (Wright, I, p. 63). The first, one of a seated boy asleep with his head in his hands and the second a drawing of a boy standing with one foot on a low wall, his head supported in his hand (fig. 2). The model for the boy in Edwin was, according to Bembridge, Thomas Haden, later a successful surgeon in Derby and the son of a friend of the artist. Nicolson identifies a drawing in a private collection (fig. 3) as a preliminary pencil study of the boy for Edwin in which he wears a Van Dyck dress, seemingly leaning against a wall. The related, newly discovered work appears to have played a critical part in the process of the production of the large-scale exhibition painting. It must be the portrait study from life of young Thomas Haden which the artist then used as the prototype for Edwin. In it the artist evolved the most soulful pose for Edwin that was to become the standard for later contemplative figures: seated, head-on-hand, one knee crossed over the other. He was to repeat this pose in his Maria of 1781, The Indian Widow (both Derby Art Gallery) and Mrs. Morewood (private collection). The head in the present work has an immediacy and freshness to it that is lost in the large-scale exhibition painting of Edwin. The related portrait was painted on a standard 30 x 25 inch canvas normally used by Wright for half-length portraits. However, in this instance the artist has turned the canvas on its side so that the left arm and hand of the sitter as well as the head could be included. There are significant differences in the costume of the boy in the two works: in ours, the pinkish-brown jacket with its slashed sleeves and frilly shirt is closer to a van Dyck-type dress whereas in Edwin, the pale jacket is plainer and blue, a color associated with melancholy. Furthermore, in the present portrait the artist does not include any of the specific references to Dr. Beattie's character such as the pipe or the inscription behind the figure. He does, however, pose Thomas Haden against a rocky outcrop with beautiful passages of dragged paint, some using a palate knife to articulate the mossy, vegetative surface of the rock-face. Although, nothing is yet known about the early provenance of the related work it is possible that the artist gave it to the Haden family. Another, similarly informal portrait study of Thomas's twin daughters, Anna and Sarah Haden, was painted by the artist late in his career (fig. 4; private collection). (from http://www.christies.com/LotFinder/LotDetailsPrintable.aspx?intObjectID=4892977)

Given to Henry Irving by Miss C. Gretta Morritt on 8th July 1893, and given by him to Ellen Terry; acquired with Smallhythe Place by National Trust in 1939

on reverse by Henry Irving note to state that 'the picture was given to H. Irving by Miss C. Gretta Morritt of Rokeby, Barnard Castle on 8th July 1893 and given by him to Ellen Terry'