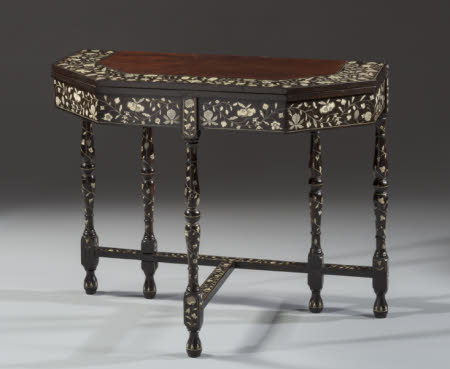 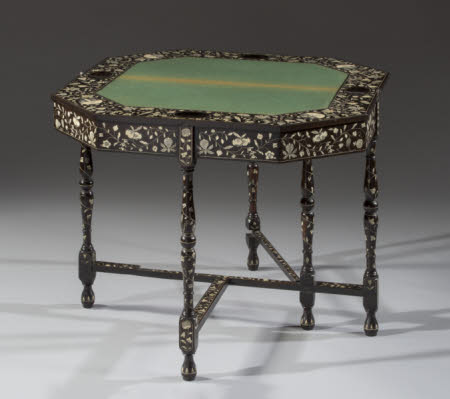 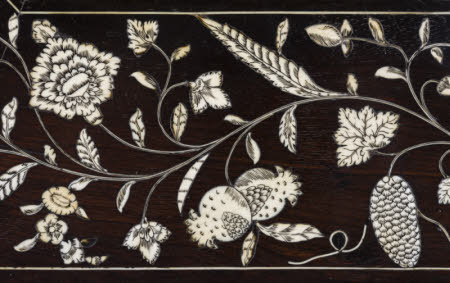 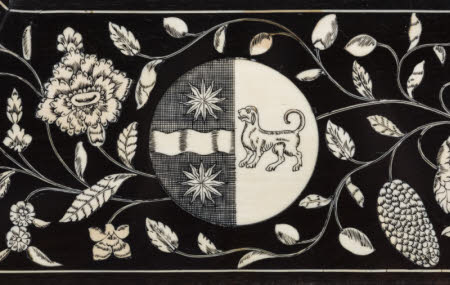 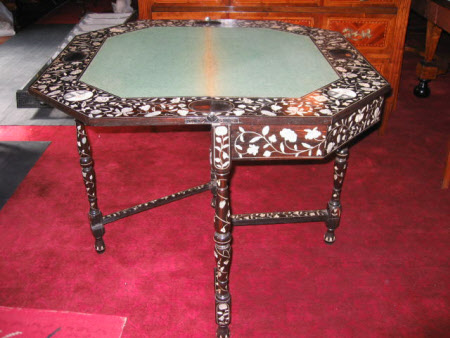 A fold-over gaming table, of padouk and ebony inlaid with engraved ivory, Visakhapatnam, India, first quarter of the 18th century. The top with canted corners, ivory inlaid ebony border and folding open on iron hinges to form an octagonal table, inlaid with green cloth or baize. The broad ebony border with four counter or token wells at the cardinal points and with a coat of arms at each ordinal point. Raised on five opposing baluster-and ball-turned legs, terminating in blocks and pear feet. Above inlaid friezes, one fitted with a small drawer. One of the legs hinged to support the top when open. Inlaid throughout, even to the feet and leg blocks, with scattered Indian flowers, seed pods and leaves on undulating stalks and foliate tendrils. Inlaid with ivory, engraved and highlighted with lac. The coat of arms that of Drake - 'sable, a fess wavy between two pole stars' and another unidentified family whose arms 'a Talbot statant'.

This rare table was made in the city of Visakhapatnam (Vizagapatam) in the state of Andhra Pradesh, a natural harbour with a thriving textile industry and a cabinet-making tradition renowned for its use of ivory inlay and veneers. A centre for European trading activity from the 17th century, Visakhapatnam was ruled successively by the Mughal Qutb Shahis (between 1689 and 1724), Nizam (1724–1757) and France (from 1757), before being captured by the British East India Company armies in 1765. European colonial encroachment in India, and its intensification in the first half of the 18th century, involved the looting and seizure of India's material culture – art, precious objects and resources – but it is also stirred a transfer of materials, techniques, knowledge and fashions which, rather like in Guangzhou (see Chinese Export furniture at Osterley, NT 771891, 773356 and 773362) and other trading ports, stimulated an export market in furniture specifically for European buyers. This table, though English in form, is decorated in a characteristically Indian style, and with Indian flora. It is likely that this table was legitimately purchased, having been specially commissioned by the family whose arms it bears.

Probably the property of the William Douglas-Hamilton, 12th Duke of Hamilton (1845-1895) and sold by Christie's (17, 19 and 20 June 1882) as Lot 296 'An Octagonal Card Table with borders of ebony, inlaid with shields of arms and flowers of engraved ivory'. Sold to a W. H. Tuck (unidentified but possibly the artist William Henry Tuck (1804-1922). Listed in the inventory of the possessions of Lady Wraxall in 1934. Thence by descent until purchased from the estate of the late Lord Wraxall with the assistance of the NHMF and donations from members and supporters.