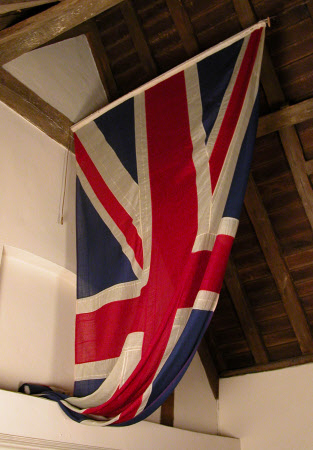 A Union flag which was the first British flag to fly in Italy after the Landings of September 1943. Given to Sir Winston by Field Marshall Lord Alexander.

This union flag hangs in Sir Winston Churchill’s study at Chartwell, and it was the first flag to be raised over liberated Rome in 1944. The invasion of Italy by the Allies began in 1943 following the collapse of support for the Mussolini regime after his promises of an Italian Empire failed to materialise. In July of that year Allied troops invaded Palermo and Messina in Sicily, which resulted in the Fascist Grand Council asking the King of Italy, Victor Emmanuel III to end Mussolini’s dictatorship, which he did by ordering his arrest. After Mussolini was arrested the new government which was formed, started having secret talks with the Allied forces, although publically still claimed its allegiance with Germany. However in September 1943 Hitler found out about these secret talks and ordered his troops to occupy Italian airbases. Following this move by Hitler, Sir Winston Churchill claimed that now was the time to start the proper invasion of the Italian mainland. Despite an armistice being signed on 3 September 1943 between the Italians and the Allies, the invasion of Italy was not over, as it was not only the Allies that King Victor Emmanuel III was trying to make deals with but also the Germans. On the day of the armistice signing Allied troops, consisting of British and Canadian forces, entered mainland Italy and began their invasion. The King and his family, along with the Italian Prime Minister fled Rome leaving Italian troops unsure of their next move, with many having to decide whether to desert their units or face internment by the German army. However, on 12 September 1943 a successful German raid was undertaken to free Mussolini from his imprisonment. Throughout the rest of 1943 the Germans began to retreat, with them and the Allies suffering big numbers of fatalities. In January 1944 Churchill ordered British and Canadian troops to capture Rome, which they did through blocking German lines at Anzio, which they were not able to break until June 1944. The Allies were able to capture Rome on 4 June 1944 where this flag was raised. It was later given to Sir Winston by Field Marshall Lord Alexander.