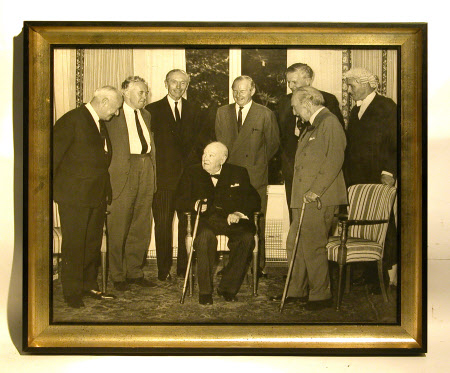 Photograph of WSC with 7 others at the occasion of his retirement as a Member of Parliament; glazed and framed

Reverse: "Issued for British Information Services for by the Central Office of Information, London. Sir Winston Churchill Retires: The End of Sixty Years as a Member of Parliament, On July 27th, Sir Winston, now in his 90th year, took his seat in the House of Commons for the last time. Later at his home a delegation from the House presented him with a vote of thanks inscribed on vellum. The message recorded the unbounded admiration and gratitude of the House for his services to Parliament, to the nation and to the world. Picture shows from left to right: Mr. Emanuel Shinwell, Mr. Harold Wilson, Leader of the Opposition; Sir Alec Douglas -Home, PrimeMinister; Mr. Selwyn Lloyd, Leader of the House; Mr. J. Grimmond, Leader of the Liberal Party; Sir Thomas Moore, Deputy Father of the House and Mr. D. W. S. Lidderdale, Clerk Assistant to the House. AP 118873, August 1964"