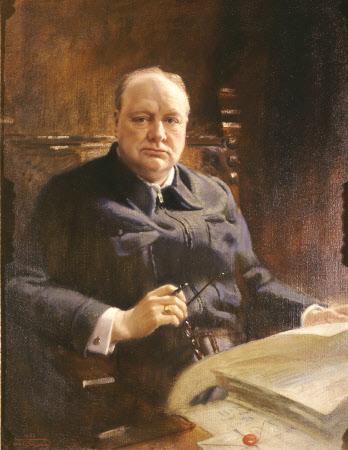 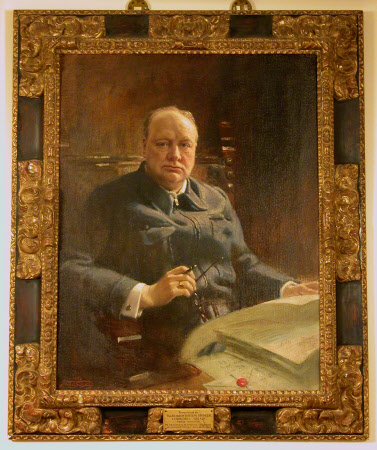 Oil painting on canvas, Sir Winston Leonard Spencer-Churchill, KG, DL, OM, CH, PC, MP (1874-1965) by Sir Frank Owen Salisbury RA (Harpenden 1874 – 1962), signed and dated 1942. A half-length portrait, wearing a blue 'siren' suit and seated at his desk holding his spectacles. According to the artist himself (Frank Salisbury, Portrait and Pageant, 1944), at the time of Churchill's "blood, sweat and tears" speech in 1940: "His invincible gallantry fixed me with a desire to paint his portrait as my personal expression of sincere admiration". Sittings were obviously impossible, but he was - very unusually - allowed by the Prime Minister's Parliamentary Private Secretary to study and make pencil drawings of the PM from behind the Speaker's Chair in the House of Lords (to which the Commons had withdrawn following the destruction of their own Chamber by bombing). From these studies Salisbury painted not one, but two, portraits: "The first showed the great Parliamentarian, in the conventional morning dress of the grave stateman, our foremost Commoner addressing the assembly as whose servant it is his habit, with proud humility, to describe himself." After inspection and approval at 10 Downing Street, this was bought by Sir Frederick Heaton, and presented to Harrow School (an autograph replica, signed and dated 1943 was commissioned by the members of the Constitutional Club , Queen Anne's Gate, to hang in the reconstructed House of Commons [though the rules of the House would surely have prevented this in the sitter's lifetime?]. Following the amalgamation of the Constitutional Club with the St Stephen's Club in 1978, and the Conservative victory in 1979, it hung at 10 Downing Street, until it was auctioned by Sotheby's on 27 November 1996, lot 51 on behalf of St Stephen's Constitutional Club). "The second portrait that I painted was symbolic. It shows the Prime Minister in his siren suit, habitually immersed in the vital administration of worldwide strategy and the balancing of conflicting elements, as an exemplar of actual toil and physical effort." After exhibition, the Devonshire Club wanted to acquire it, but: "When they learned that Mrs Churchill liked it, and pronounced it an exact likeness of her husband in those tremendous days, they decided to present it to the Prime Minister.....On receiving the gift, Mr Churchill declared that the portrait would be a treasured heirloom in his family."